Micro Solutions:
How to implement redundancy in stepper motors

Some of the recent research activities in the area of electric motor drives for critical applications (such as aerospace and nuclear power plants) are focused on looking at various fault-tolerant motor and drive topologies. After discussing different solutions, this article concentrates on a miniature PM stepper motor design that falls in this fault-tolerant category by providing an increased redundancy.

Safety-critical systems are taking on increasing importance in the industrial world. Some examples of such systems are used in aerospace, transportation, medical, military, and nuclear power plant applications. These all accommodate a number of electric motor drives installed to a point where the applications rely heavily upon them. Any failure in these drives may cause catastrophic failures, which may be very costly in terms of human resources and capital costs, and clearly undesirable.

Techniques behind most of the electric drives on the market today are not adequate for safety-critical applications. Therefore, there is a need to improve the survivability of critical systems given the increasing dependence on them and the serious consequences of their failure. One of the common tools used in the design of safety-critical systems is redundancy. Ideally, many fault-tolerant systems should mirror all operations; that is, every operation should be performed on two or more duplicate systems, so if one fails the other can take over. Therefore, redundancy within the system is an essential aspect.

What solutions are offered?
Coupling two motors on the same shaft (Figure 1) is what comes normally to one's mind first. 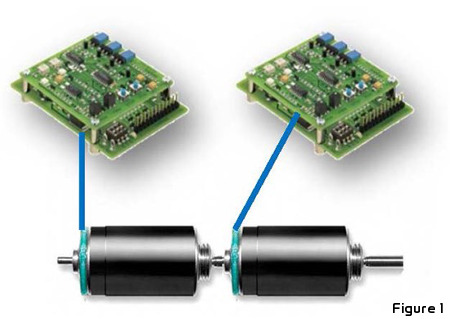 Although its implementation is straightforward, this solution presents several drawbacks that are often underestimated:

Duplicating the windings of a traditional two-phase PM stepper motor is also conceivable. The windings could be either made of individual components placed side by side (Figure 2) in order to create a pair of two-phase motors or, with the same intent, made of two windings wound together (Figure3).

Both, however, do not secure an optimal thermal insulation, and the fault of one phase may be propagated to the one next to it. Overall, these designs require significant modifications of the motor construction and do not meet exactly the specification of a fault-tolerant motor as described above.

The existence of PRECIstep Disc Magnet motors (Ø6 mm or Ø12 mm) from MICROMO simplifies the quest for redundancy capability. By default, this patented motor design features four windings that are normally connected by pair to form a two-phase stepper motor.

A customized solution with the four windings independent from each other creates two two-phase PM stepper motors with physically and electrically isolated phases that are the key to achieve a failure-free system (Figure 4). 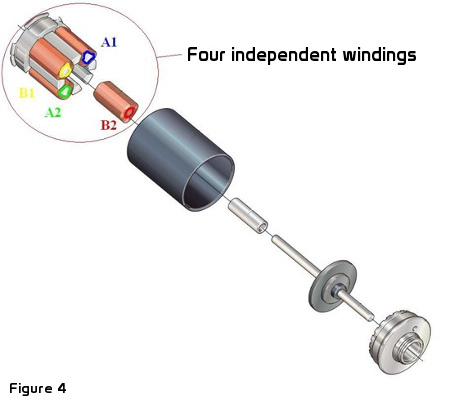 The windings are only partially magnetically coupled, and the redundant configuration leads to a torque reduction of only 30 percent when compared to the standard motor configuration at equivalent dissipated power. With proper heat sink and phase current increase, the same output torque can be reached.

Conclusion
The specific and patented design of some existing small miniature motors such as the PRECIstep Disc Magnet motors (down to Ø6 mm) meets, with very little adaptation, the specifications for a fault-tolerant, robust, reliable motor with the degree of redundancy that is crucial in safety-critical applications that rely on the failure-free operation of electric motor drives.