The new, patented SDLM-019-070-01-01 direct drive linear motor with integrated position and temperature sensors is the latest addition to the series of zero-backlash, zero-cogging, high-acceleration, high-speed, high-resolution, long-life motors from Moticont. Also known as an electric cylinder, this compact direct drive linear motor is just 0.75 in. (19.1 mm) in diameter and 2.75 in. (69.9 mm) long. Protected inside the motor housing, the linear optical quadrature encoder is directly connected to the shaft for the greatest possible accuracy. Highest throughputs are achieved by this motor when operating at peak efficiency, monitoring the data from the internal temperature sensor.
Learn more.

Depend on FAULHABER drives for critical medical applications 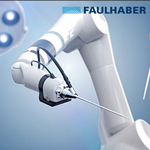 Today's latest automated guided vehicles (AGVs) require highly responsive braking and holding power while minimizing battery usage. The Miki Pulley BXR-LE brake is a power-off engaged brake that will hold the AGV in place when not in use. When the AGV must navigate the production floor, the brake is energized, which disengages the rotor disc and allows free rotation of the AGV drive wheels. The BXR-LE brake uses 24 VDC for a split second to overcome compression spring inertia to open the brake, then consumes only 7 VDC by utilizing the BEM power control module. This saves battery power and minimizes the number of battery recharging operations needed to keep the AGV in continuous operation.
Learn more. 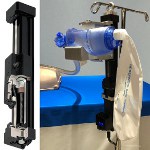 Tolomatic has applied its linear motion expertise to develop prototypes of a new type of ventilator that uses an electric linear actuator to automate a non-invasive, positive-pressure resuscitator known as an Ambu bag. The company is looking for partners to develop this equipment to help fight COVID-19.
Learn more and see how the Tolomatic designs work. 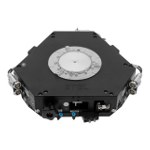 The new Z3TM from ETEL is a compact motion platform that provides a surface with four degrees of freedom into a stacked architecture and is an alternative to piezoelectric solutions. It was designed in response to the needs of advanced wafer positioning in the semiconductor industry, but can also be used in a variety of industries such as medical, pharmaceutical, and general inspection. The Z3TM platform uses a combination of three flexures and a rotary module to provide rotary, Z-axis, and two oblique axis motions to a plate that can be anchored to a supporting table for multiaxial motion solutions.
Learn more. 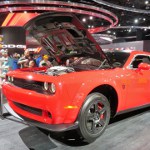 Tolomatic linear actuators are used worldwide in a myriad of industries for automation tasks like conveying, sorting, and filling, but they are also used in demanding, non-industrial applications such as simulators for flight, driving, testing, and entertainment. Learn how electric high-force linear actuators helped simulate the experience of popping a wheelie in a true muscle car.
Read this informative Tolomatic blog post. 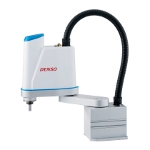 DENSO Robotics developed the entry-level LPH to meet the demand for precision robots needed for light-duty manufacturing applications. Equipment manufacturers who are new to automation, companies reinventing their product lines, and entrepreneurs launching new devices are among those who make up the growing market for high-quality robots that don't break the bank. Compact and lightweight, the LPH is a 4-axis selective compliance assembly robot arm (SCARA) built to handle a maximum payload of no more than 6.6 lb (3 kg) with a maximum arm reach of 1.3 ft (400 mm). When operated routinely at the highest rated payload, the LPH has a life cycle of up to five years. For lighter loads, the LPH has a longer life cycle.
Learn more.

Allied Motion Technologies has released the new KinetiMax High Power Density (HPD) motor series. This outer-rotor brushless motor is designed for high-torque, low-cogging applications like robotics, AGVs, and handheld power tools. With an efficiency rating of over 85 percent and a high power-to-weight ratio, it's an ideal motor choice for any application where weight and battery life are critical. They are available in six frame sizes, with three stack lengths per size and three windings per stack length.
Learn more. 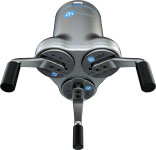 See how the three-finger gripper is ideal for gripping a wide range of cylindrical objects in machine-tending applications such as CNC lathe machines. Its design automatically centers workpieces, resulting in fast deployment with a strong, stable grip and precise placement. The 3FG15 offers seamless integration with the robots of your choice.
Learn more and see it in action. 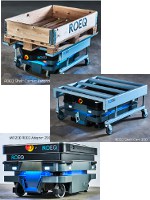 Denmark-based robotics company ROEQ has just launched three new products simultaneously with the reveal of Mobile Industrial Robots' new MiR250 mobile robot. The Shelf-Cart 300 is a vehicle for carrying up to 300 kg (661 lb) that the MiR250 can pick up and deliver anywhere in the workplace, even without a docking station. The new Adapter Module 250 enables the use of three of the existing ROEQ top modules on the new MiR250 robot. The Shelf Carrier 300 Extended is an extended top module specifically designed for the MiR250 robot, making it long enough to carry Euro pallets without compromising safety.
Learn more about these and other ROEQ products. 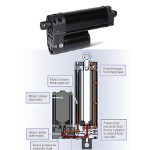 For motion control applications such as snow plows and utility vehicle dump beds, designers have traditionally chosen between hydraulic and electromechanical technologies but have had to accept some tradeoffs for each. However, there is now a hybrid solution from Thomson Industries that offers the best features of both technologies without the drawbacks.
Read the full article. 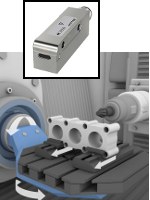 Balluff's BML absolute magnetic encoder in the SGA series stands out in any application where high accuracy of position and end-of-travel is required. Comprehensive diagnostic functions ensure reliable operation and more efficient maintenance. It also has plug-and-play installation. With its Drive-Cliq interface, the Balluff measuring system can be integrated easily into Siemens controller environments. Perfect for demanding applications in the field of automation as well as machine tool building, especially specialty machines.
Learn more.

With a rated power up to 400 W, the brushless DC motors of the APBA60 series from Nanotec offer a high-performance alternative to AC servos motors with the same flange size. The new DC motors are rated IP65 and come standard with integrated encoder or with encoder and brake. They are available in two lengths and have a rated speed of 3,000 rpm and a rated voltage of 48 V. They are ideally suited for battery-powered applications, such as AGVs or service robots. They are also safe for use in medical or other environments where standard AC servos would require additional insulation and safety measures. The APBA60 is mechanically compatible with 60-mm AC motors and can be combined with a variety of gearboxes and motor controllers from Nanotec.
Learn more. 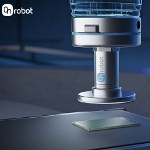 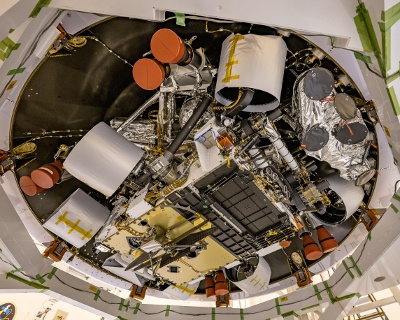 NASA's Mars Perseverance rover's descent stage was recently stacked atop the rover at Kennedy Space Center, and the two were placed in their back shell. The Ingenuity helicopter can be seen attached to the rover's underside (lower center of the image). [Image credit: NASA/JPL-Caltech]

Engineers working on NASA's Perseverance rover mission at the Kennedy Space Center in Florida have begun the process of placing the Mars-bound rover and other spacecraft components into the configuration they'll be in as they ride on top of the United Launch Alliance Atlas V rocket. The launch period for the mission opens on July 17 -- less than two months from now.

Called "vehicle stacking," the process began on April 23 with the integration of the rover and its rocket-powered descent stage. One of the first steps in the daylong operation was to lift the descent stage onto Perseverance so that engineers could connect the two with flight-separation bolts.

When it's time for the rover to touch down on Mars, these three bolts will be released by small pyrotechnic charges, and the spacecraft will execute the sky crane maneuver: Nylon cords spool out through what are called bridle exit guides to lower the rover 25 ft (7.6 m) below the descent stage. Once Perseverance senses it's on the surface, pyrotechnically fired blades will sever the cords, and the descent stage flies off. The sky crane maneuver aims to ensure Perseverance will land on the Martian surface free of any other spacecraft components, eliminating the need for a complex deployment procedure.

VIDEO: NASA's Al Chen, Mars 2020 Entry, Descent & Landing Lead for the Mars Perseverance rover, talks about the new systems in place to face the challenges of the upcoming mission.

"Attaching the rover to the descent stage is a major milestone for the team because these are the first spacecraft components to come together for launch, and they will be the last to separate when we reach Mars," said David Gruel, the Perseverance rover assembly, test, and launch operations manager at NASA's Jet Propulsion Laboratory in Southern California, which manages rover operations. "These two assemblies will remain firmly nestled together until they are about 65 ft [20 m] over the surface of Mars." 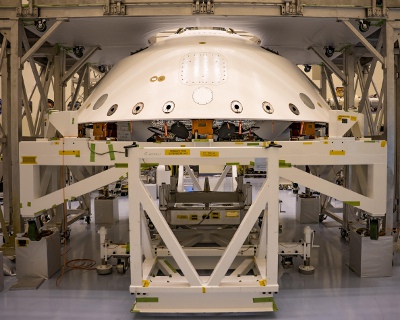 The cone-shaped back shell for NASA's Perseverance rover mission is shown in this April 29, 2020, image from the Kennedy Space Center in Florida. [Image credit: NASA/JPL-Caltech]

Whether they are working on final assembly of the vehicle at Kennedy Space Center, testing software and subsystems at JPL, or (as the majority of the team is doing) teleworking due to coronavirus safety precautions, the Perseverance team remains on track to meet the opening of the rover's launch period. No matter what day Perseverance launches, it will land at Mars' Jezero Crater on Feb. 18, 2021.

The Perseverance rover's astrobiology mission will search for signs of ancient microbial life. It will also characterize the planet's climate and geology, collect samples for future return to Earth, and pave the way for human exploration of the Red Planet. 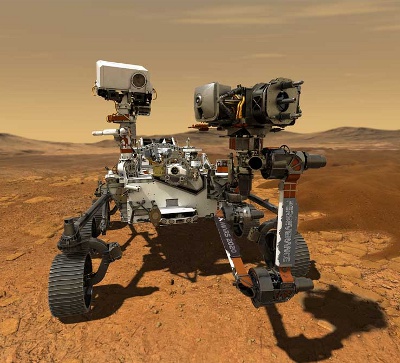 This illustration depicts NASA's Perseverance rover operating on the surface of Mars. Perseverance will land at the Red Planet's Jezero Crater a little after 3:40 p.m. EST (12:40 p.m. PST) on Feb. 18, 2021. [Image credit: NASA/JPL-Caltech]

The rover will feature many new technology innovations, including the most advanced pair of "eyes" ever sent to the Red Planet's surface. The Mastcam-Z instrument packs a next-gen zoom capability that will help the mission make 3D imagery more easily.

The mission will also include NASA's small Mars Helicopter (called Ingenuity), the first aircraft to attempt powered flight on another planet. The helicopter will ride to Mars attached to the belly of the Perseverance rover. For several months following the rover's landing, Ingenuity will remain encapsulated in a protective cover to shield it from debris during entry, descent, and landing. When the timing in the rover mission is right, Ingenuity will be deployed to stand and operate on its own on the surface of the Red Planet.

If the 4-lb (1.81-kg), solar-powered craft -- a combination of specially designed components and off-the-shelf parts -- survives the cold Martian nights during its pre-flight checkout, the team will proceed with testing. If successful during its 30-Martian-day (31-Earth-day) experimental flight test window, the small craft will prove that powered flight can be achieved on Mars.

The Perseverance rover mission is part of a larger program that includes missions to the Moon as a way to prepare for human exploration of the Red Planet. Charged with returning astronauts to the Moon by 2024, NASA aims to establish a sustained human presence on and around the Moon by 2028 through NASA's Artemis lunar exploration plans.

Learn more about the program here.