That spot of oil on the garage floor dripping from your engine indicates a problem. It's so small that you put off going to the mechanic, until you hear a new noise and the oil pressure warning light goes off. The bad news is that one of the bearings in the crankshaft is the source of the issue. Due to wear, the normally round part is now more elliptical in shape. Some of the metal has worn away, landing you with a costly repair.

This kind of wear on engine components is common because of friction, and it happens in all machinery with moving parts. Lubricants that reduce friction can only delay and minimize this inevitable damage. The idea of reversing that wear by fixing a worn part was the dream of Washington State University PhD candidate Pavlo "Pasha" Rudenko, who decided to research using smart nanoparticles to replace eroded material.

Seen under an electron microscope, the nanoparticles in the TriboTEX additive are "sticky" on one side and "slippery" on the other. The sticky side is attracted to areas of friction and attaches itself to those pits and grooves, building up layers until the friction is eliminated. The heat and pressure of the engine environment fuse the nanoparticles in place, creating a new, slick surface that's usually smoother than the original material.

Restoring damaged parts to a like-new condition was also intriguing to NASA, which in 2011 awarded Rudenko a fellowship through the Washington Space Grant Consortium to pursue this new application of nanotechnology.

In 1989, NASA started the National Space Grant College and Fellowship program, also known as Space Grant, to "contribute to the nation's science enterprise" in disciplines that help advance missions. The competitive awards represent the cutting edge of new research or taking established disciplines in new directions. Rudenko's nanotechnology coating fell into a field of study known as tribology -- the science and engineering behind friction, lubrication, and wear.

Parts that move in relative motion, either working together or against each other, will always experience friction and, sooner or later, wear. In situations where the friction between parts inhibits machine performance, lubricants are used. Many common lubricants are oil-based -- mineral or plant -- and contain numerous fortifying additives, without which the oil would quickly degrade. Additionally, these chemicals, which are dissolved or suspended in the oil, perform a variety of functions: They maximize viscosity at different temperatures, remove debris, and improve chemical stability.

Rudenko's research into a nanotechnology additive to fix the wear on engine parts began in 2009, starting with efforts to improve existing lubricants. A grant from the Hydropower Research Foundation with money from the U.S. Department of Energy developed the initial data. His successful NASA fellowship application proposed creating a nanoparticle lubricant that would work at any temperature, including in the extremes of space.

The goal was to use an existing liquid lubricant to carry nanoparticles directly to the point of friction. Rudenko believed this solution would be ideal for satellites and space vehicles. In addition to keeping parts in good repair, such a nanofluid lubricant could extend the functional life of the systems using it. His initial university research identified the best material -- a type of ceramic -- which was effective, durable, and nontoxic. But the synthetic material was also expensive to create.

NASA's feedback was positive yet tempered by the reality of how long it takes to qualify such a new technology for space. Qualification wasn't practical at such an early stage in the life of the technology, so Rudenko turned to the private sector to continue his research and development.

Technology transfer
Before starting TriboTEX LLC in 2013 and becoming its chief technology officer, Rudenko pursued additional funding opportunities for nanoparticle manufacturing. A Global Impact Award from Singularity University, an organization supported by a Space Act Agreement with Ames Research Center and housed in the NASA Research Park at Ames, helped the fledgling company get started. Two Small Business Innovation Research (SBIR) contracts from the National Science Foundation enabled Rudenko to scale the production of his nanoparticles.

The material, also called nano-flakes, is sticky on one side and smooth on the other. The sticky side is attracted to points of friction and attaches itself to those spots, leaving the smooth side facing out. This happens over and over, building up layers of nanoparticles until a given rough spot is smoothed over, much like filling a pothole in a street. The heat and pressure that naturally occur with friction bond the nano-flakes together, forming a new, durable carbon-lattice surface that Rudenko calls "diamond-like." 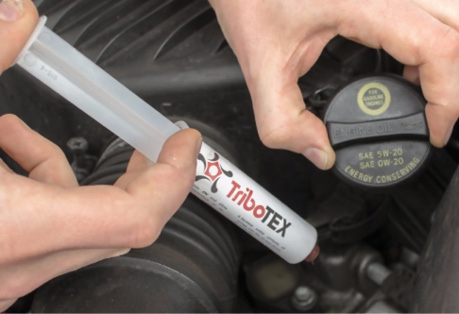 TriboTEX's product can be added by the consumer directly to a warmed-up engine. From there, it begins to repair damage over time.

Even when the surface of a metal part appears smooth to the eye and touch, an atomic force microscope can reveal imperfections at the nanoparticle level that can and do create friction. With an aim toward fixing these tiny imperfections in engines, the first TriboTEX formula was created to work in automobiles.

Benefits
With his product formula refined, the ability to manufacture it at scale, and a company to market and distribute the product, Rudenko launched a crowdfunding campaign. In 2017, he secured the funding needed to launch TriboTEX, raising over a half-a-million dollars and earning the Indiegogo Innovative Product of 2018 award.

Throughout 10 years of product development, the company made numerous appearances at conferences and trade shows. Some of the many awards the technology earned include a Defense Innovation Award, American Society for Engineering Education Fellowship, Licensing Executives Society Members Choice Award, and the University of Washington Best Technology.

Today, more than 30,000 cars and trucks are using TriboTEX. That usage data is expanding the body of evidence that synthetic nanoparticles yield the intended results. The most common benefits drivers report are improved gas mileage, increased torque, and increased oil pressure.

In cars with 130,000 miles or more, the company claims that fuel economy can be improved up to 6 percent along with increased in-cylinder compression. The particles also decrease engine noise by filling in gaps and grooves as small as 40 microns, about the width of a human hair -- although they also stop building up once the gap is filled. Cars can also increase their engine power up to 3 percent, says Rudenko, noting that this is remarkable for a treatment that circumvents the cost of dismantling any part of the engine. Adding TriboTEX to a vehicle every 40,000 miles will ensure that there are enough nanoparticles available to fix new instances of wear in parts of the engine that experience significant friction, he adds.

As consumers have used TriboTEX, they've suggested other potential applications, and the company is responding. It now offers a small-engine product for use in motorcycles, lawn mowers, generators, and compact cars. A high-performance version is formulated to work in diesel trucks and large-engine sports cars. The "big rig" formula treats semi-tractor trailer engines. A national, commercial trucking company is testing TriboTEX in a number of trucks in its fleet. But cars and trucks are just the beginning.

"We're working on using nanomaterials in aviation gearboxes," says Rudenko. AFWERX, a program of the U.S. Air Force designed to foster engagement across industry, academia, and non-traditional contributors to develop a culture of innovation, awarded TriboTEX a Phase I SBIR contract. This is making it possible for TriboTEX to create the new formula and develop the required mechanic's procedures. If Phase II funding is approved, the nanoparticle additive will run in the Air Force test stand.

Rudenko sees this opportunity in aviation as coming full circle to NASA and helping him realize his dream of being in flying machines.

"NASA support was critical in getting to this point," he says.