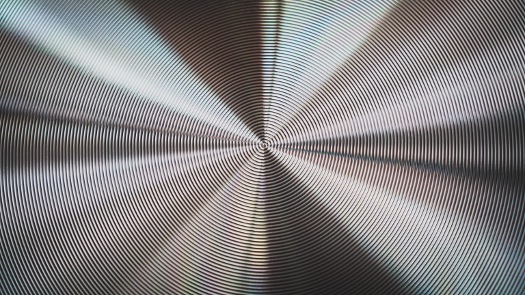 By Paul Gabrielsen, The University of Utah

You can't see them, but most of the metals around you -- coins, silverware, even the steel beams holding up buildings and overpasses -- are made up of tiny metal grains. Under a powerful enough microscope, you can see interlocking crystals that look like a granite countertop.

It's long been known by materials scientists that metals get stronger as the size of the grains making up the metal get smaller -- up to a point. If the grains are smaller than 10 nanometers (nm) in diameter, the materials are weaker because, it was thought, they slide past each other like sand sliding down a dune. The strength of metals had a limit.

But experiments led by former University of Utah postdoctoral scholar Xiaoling Zhou, now at Princeton University, associate professor of geology Lowell Miyagi, and Bin Chen at the Center for High Pressure Science and Technology Advanced Research in Shanghai, China, show that that's not always the case. In samples of nickel with grain diameters as small as 3 nm, and under high pressures, the strength of the samples continued to increase with smaller grain sizes.

The result, Zhou and Miyagi say, is a new understanding of how individual atoms of metal grains interact with each other, as well as a way to use those physics to achieve super-strong metals. Their study, carried out with colleagues at the University of California, Berkeley and at universities in China, is published in Nature.

"Our results suggest a possible strategy for making ultra-strong metals," Zhou says. "In the past, researchers believed the strongest grain size was around 10 to 15 nanometers, but now we found that we could make stronger metals at below 10 nanometers."

Pushing past Hall-Petch
For most metallic objects, Miyagi says, the sizes of the metal grains are on the order of a few to a few hundred micrometers -- about the diameter of a human hair. "High-end cutlery often will have a finer and more homogeneous grain structure, which can allow you to get a better edge," he says.

The previously understood relationship between metal strength and grain size was called the Hall-Petch relationship. Metal strength increased as grain size decreased, according to Hall-Petch, down to a limit of 10 to 15 nm. That's a diameter of only about four to six strands of DNA. Grain sizes below that limit just weren't as strong. So, to maximize strength, metallurgists would aim for the smallest effective grain sizes.

The explanation for the weakening below 10 nm had to do with the way grain surfaces interacted. The surfaces of grains have a different atomic structure than the interiors, Miyagi says. As long as the grains are held together by the power of friction, the metal would retain strength. But at small grain sizes, it was thought, the grains would simply slide past each other under strain, leading to a weak metal.

Technical limitations previously prevented direct experiments on nanograins, though, limiting understanding of how nanoscale grains behaved and whether there may yet be untapped strength below the Hall-Petch limit. "So, we designed our study to measure the strength of nanometals," Zhou says.

Under pressure
The researchers tested samples of nickel, a material that's available in a wide range of nanograin sizes, down to 3 nm. Their experiments involved placing samples of various grain sizes under intense pressures in a diamond anvil cell and using X-ray diffraction to watch what was happening at the nanoscale in each sample. 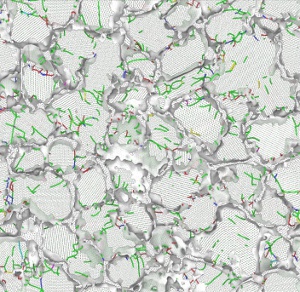 "If you've ever played around with a spring, you've probably pulled on it hard enough to ruin it so that it doesn't do what it's supposed to do," Miyagi says. "That's basically what we're measuring here; how hard we can push on this nickel until we would deform it past the point of it being able to recover."

Strength continued to increase all the way down to the smallest grain size available. The 3-nm sample withstood a force of 4.2 gigapascals (about the same force as 10 10,000-lb elephants balanced on a single high heel) before deforming irreversibly. That's 10 times stronger than nickel with a commercial-grade grain size.

It's not that the Hall-Petch relationship broke down, Miyagi says, but that the way the grains interacted was different under the experimental conditions. The high pressure likely overcame the grain sliding effects.

"If you push two grains together really hard," he says, "it's hard for them to slide past each other because the friction between grains becomes large, and you can suppress these grain boundary sliding mechanisms that are responsible for this weakening."

When grain boundary sliding was suppressed at grain sizes below 20 nm, the researchers observed a new atomic-scale deformation mechanism that resulted in extreme strengthening in the finest-grained samples.

Ultra-strong possibilities
Zhou says that one of the advances of this study is in their method to measure the strength of materials at the nanoscale in a way that hasn't been done before.

Miyagi says another advance is a new way to think about strengthening metals -- by engineering their grain surfaces to suppress grain sliding.

"We don't have many applications, industrially, of things where the pressures are as high as in these experiments, but by showing pressure is one way of suppressing grain boundary deformation we can think about other strategies to suppress it, maybe using complicated microstructures where you have grain shapes that inhibit sliding of grains past each other."

You can find the full study, "High-pressure strengthening in ultrafine-grained metals," published in Nature, February 2020, here.