Engineers at Empirical Systems Aerospace (ESAero) perform fit checks on the future wing to be used on the final configurations of NASA's all-electric X-57 Maxwell at their facility in San Luis Obispo, CA. Using a "fit check" fuselage, seen here, the team is able to determine the safest and most efficient method of integrating the wing to be used in Mods III and IV of X-57, while the primary fuselage prepares for ground, taxi, and flight tests at NASA's Armstrong Flight Research Center in Edwards, CA. [Credits: Empirical Systems Aerospace]

Significant progress is being made in preparation for NASA's first all-electric X-plane, the X-57 Maxwell.

As NASA completes tasks for X-57's functional ground testing at its Armstrong Flight Research Center in Edwards, CA, working toward taxi testing and first flight, assembly and qualification tests are underway on two critical components of the X-57 vehicle at NASA's prime contractor for the project, Empirical Systems Aerospace, or ESAero, of San Luis Obispo, CA.

These components include the electric cruise motors, which will power X-57 in flight, and the future high-aspect-ratio wing that will fly on the aircraft in X-57's final configuration. 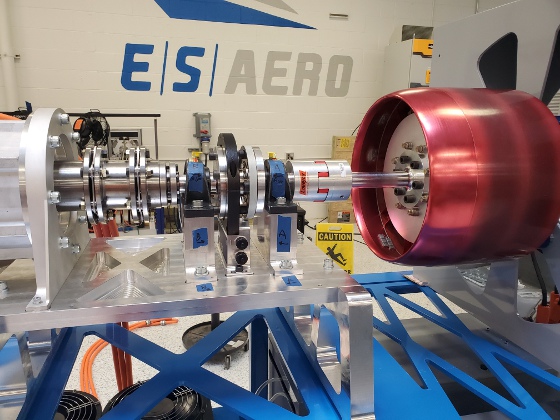 As part of the verification and validation process, the all-electric cruise motors to be used on NASA's X-57 Maxwell began several rounds of high-power and endurance tests at ESAero. The lessons learned from the cruise motor tests will help in the effort to set airworthiness standards for electric aircraft. [Credits: Empirical Systems Aerospace]

X-57, modified from a Tecnam P2006T airplane, is currently in its first of three configurations as an all-electric aircraft, called Modification II, or Mod II. While this configuration features the replacement of the vehicle's standard combustion, 100-hp Rotax 912S engines with 60-kW electric cruise motors, X-57's test flights in this phase will be flown using the vehicle's standard wing.

The following phase, Mod III, will see this replaced with the high-aspect-ratio wing, greatly reducing overall vehicle area, and relocating the cruise motors out to the wingtips, before the aircraft flies in its final Mod IV configuration, which will feature the addition of 12 smaller high-lift motors along the wing's leading edge to be activated during takeoff and landing.

The constant throughout these configurations, meanwhile, will be the electric cruise motors, which have begun tests at ESAero to verify that they are ready before they are installed in the X-57 vehicle itself.

"All three mods of X-57 will utilize the same cruise motors. We've taken those cruise motors and we're putting them through functionality tests, acceptance tests, and qualification tests to ensure their airworthiness for the X-57 vehicle," said Trevor Foster, ESAero Vice President of Operations. "As part of the NASA airworthiness process, these are the verification and validation steps to reduce risks and increase the safety and reliability of the components on the vehicle." 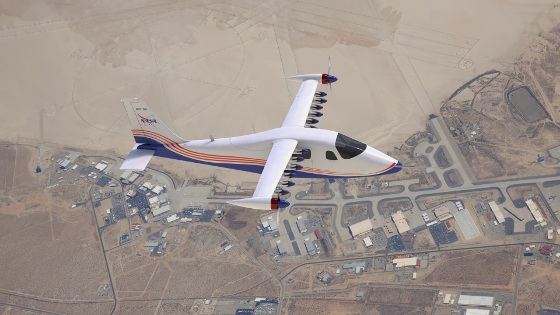 This artist's concept image shows NASA's first all-electric X-plane, the X-57 Maxwell, in its final configuration flying in cruise mode over NASA's Armstrong Flight Research Center in Edwards, CA. In Mod IV test flights, X-57's high-lift motors will deactivate during cruise mode, and their propeller blades will fold in to the nacelles to reduce drag. The motors will reactivate and use centrifugal force to spin the blades back out to provide necessary lift for landing. [Credits: NASA Langley/Advanced Concepts Lab, AMA, Inc.]

These steps include endurance and high-power testing of the cruise motors and cruise motor controllers, with a focus on monitoring overall system efficiency. To do this, engineers use a dynamometer to measure current and voltage, taking in data at a rate of 2 million times per sec. From there, the performance of these components can be recorded, analyzed, and augmented as necessary to achieve maximum efficiency. The goal of this high-power testing is to ensure that the cruise motors and their controllers can perform, with overhead, any of the steps of a flight mission.

"The endurance testing involves everything from doing small checks and low-power checks, making sure that the motor spins and communicates and gives us the information we need, all the way up to running full mission profiles, and even taking it beyond mission profiles, where you're really pushing the limits of temperature and power," said Wilson. "So far, the motors and controllers have performed exceedingly well, and we're in the process of getting them to perform even better."

While X-57 will always fly with a pair of cruise motors in each configuration, five motors in total have been built for the project. One was disassembled and used for evaluation of the unit's construction as a safety measure, two will be used as flight motors on the X-57 aircraft, and the other two will be used for envelope expansion testing and will act as spares to the flight motors.

Lessons learned from this testing are helping to pave the way for future Federal Aviation Administration airworthiness standards for electric aircraft, said Foster.

"It's critical for the success of the project that we achieve the efficiency goals that we're looking at, but also, as we're going through these steps, we're beginning to develop how anyone else in the industry is going to certify or make airworthy motors," said Foster. "We're taking those first steps."

As this cruise motor testing directly feeds the effort for X-57 Mod II, currently housed at NASA Armstrong, preparation for Mods III and IV are well underway with the team getting the vehicle's future wing ready for integration. An additional P2006T fuselage, off the same assembly line as X-57's fuselage, was acquired, and is acting as a "tooling" fuselage, allowing engineers to assess the best way to integrate the cutting-edge wing, designed by Xperimental LLC, to X-57 for Mods III and IV, and troubleshoot any challenges with the attachment.

Among the lessons learned from this phase is a better understanding of what physical modifications must be made to the fuselage to allow the wing to be mounted as efficiently and safely as possible. The wing is also undergoing instrumentation development, with engineers working to finalize the positioning of hardware inside the wing to accommodate X-57's complex distributed electric propulsion system.

"We're working to figure out the right positioning for specific instruments and how to mount them," said Phil Osterkamp, ESAero Vehicle Instrumentation Lead. "It's a small wing, and the challenge is to get all these items fitted onto and inside it, and trying to understand how to make this as light and as small as possible. It's a lot of layout and routing."

This is being done as a risk reduction for X-57, which will be the first NASA X-plane in two decades to have a test pilot onboard, but also as a schedule reduction effort. With these activities taking place in parallel to Mod II, the transitions from Mod II to Mods III and IV will require less time.

"The work being done now for X-57 is extremely important," said NASA's X-57 Project Manager Tom Rigney. "The team is proving out the key electric components that will very soon set the stage for all the parts to come together and for on-aircraft ground testing to begin. This critical step must be completed successfully before the airplane can take its first flight. Although managing this and the wing development simultaneously is challenging, doing both in parallel is proving to be a huge time savings."

As testing on these critical components continues to advance X-57 toward its historic first flight, an approaching milestone in NASA's effort to help set certification standards for electric aircraft of the future, anticipation for that day grows across the team.

"In the beginning, we were trying to push the envelope for this technology, and I think, now, sharing lessons learned along the way, we're providing more benefits to the aerospace community at this stage than we thought we would," said Foster. "It's really exciting to see how far we've come and really seeing things start to come together here in these final phases as we approach first flight for Mod II. I'm incredibly excited to see this thing fly. Words can't express it."