During an era of modernized warfare, a small cadre of Army scientists has pioneered an all-but-invincible, lightweight battery set to roll out by 2024, officials say, with Soldier feedback expected next year.

Whether isolated in the bone-chilling arctic or taking enemy fire in the most barren-regions of the Middle East, when troops -- who often rely on battery-powered technology -- need dependable energy in extreme conditions, they call the U.S. Army Combat Capabilities Development Command's Army Research Laboratory, or ARL, said Dr. Cynthia Lundgren, an electrochemist, and ARL's Energy Storage branch chief. 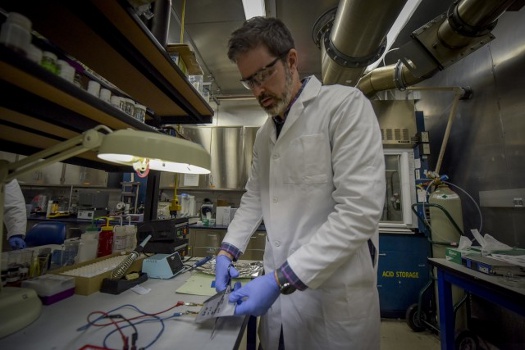 Scenarios like these are at the heart of ARL's scientific research. Located outside the nation's capital, ARL scientists have meticulously engineered sheets of bendable, water-based, non-flammable, longer-lasting lithium-ion batteries intended to support warfighting efforts.

From initially publishing a 2015 study in the journal Science outlining ways to meet the Army's needs, to engineering prototypes in 2020, the team -- alongside industry partners at the University of Maryland -- have moved at an unprecedented pace, Lundgren said, and have cut normal research time in half.

"We are moving quickly," said Dr. Arthur von Wald Cresce, ARL material scientist. "We're significantly speeding up our timeline, so instead of a 10-year development and engineering process, we're hoping to compress ours into a few years."

Although a swift pace is important, especially in the age of near-peer competitors, the safety of Soldiers remains a top priority, he said.

Next year, a Soldier touchpoint is slated for the new battery technology. Then, scientists will receive Soldier feedback on the prototype. If all goes well, the team hopes to work alongside industry partners to engineer a more advanced prototype that will be similar to what will ultimately be used Army-wide around 2024, Cresce said.

Typical batteries can be potentially dangerous during military operations, he said, where thermal and wear-and-tear become more prevalent. Under these conditions, traditional batteries can be unreliable, catch fire, or even explode.

"The average consumer is not rolling around on rocks, jumping off vehicles, or jumping out of airplanes with all of their gear," Lundgren said. "Our military sponsors are doing all of that and more. They are under a lot of stress, and they can't always pay attention to how they are treating their gear. So, we set out to make the battery safer."

Armed to produce flexible, waterproof battery technology, the team developed a more stable energy source that is able to conform to any shape and size. They have chopped up the new technology, dropped it in water, and conducted ballistic tests. 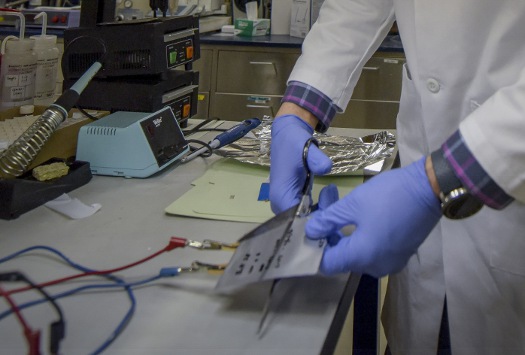 During every test, their batteries have been successful.

To make this technology, ARL scientists replaced the batteries' electrolyte agent -- which generally consists of soluble salts, acids, and more -- with water, a simpler solution. This also ensured the batteries could be waterproof, the theory first published in Science.

The technology started to take shape in 2017, when the water-salt electrolyte reached a 4.0-volt output needed for household electronics, like laptops, without any fire or risks associated, said Dr. Kang Xu, an ARL electrochemistry scientist.

"Even if water intrudes into the battery packaging, we've demonstrated that it will continue to optimally function while underwater," Cresce said. "This gives it a significant advantage over current organic batteries."

In other words, when the salt and water are combined, it forges a new kind of lithium-ion battery. This formula has helped the team develop the kind of stable, high-density energy source needed in Li-ion batteries used on the battlefield.

After developing the technology, the scientists encapsulated the water-based battery into a metal based-sheet that is flexible, able to be immersed into water, and be cut into shapes without threatening the battery's overall performance.

"When the packaging of a normal battery is compromised with ballistics, the bullet shorts the cell and connects the electrodes directly," Cresce said. "This generates heat, gas, and ignites. But with the new battery, the electrode component is a non-flammable gel, and the tendency is for a short to be covered by electrolyte material, so even if the battery is damaged -- either by blunt force or direct penetration -- the battery can generally keep working."

The scientific advancements in the labs are intended to help Soldiers in the fight, but it goes beyond that.

"We want to push the boundaries of science that would benefit all mankind, but Soldiers first," Xu said.