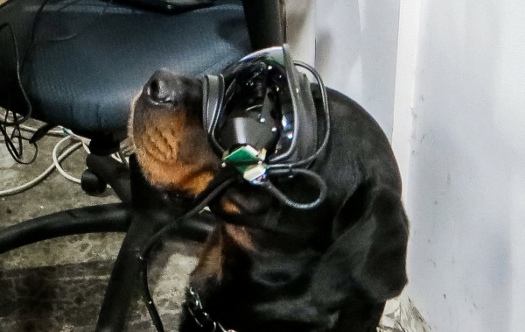 These augmented reality goggles are specially designed to fit each military working dog with a visual indictor that allows the dog to be directed to a specific spot and react to the visual cue in the goggles. The handler can see everything the dog sees to provide it commands through the glasses. [Photo courtesy: Command Sight]

Military working dogs often scout areas for explosives devices and hazardous materials and assist in rescue operations, but giving dogs the necessary commands to perform these missions can put soldiers in harm's way. Augmented reality may change that.

Through a project funded by the Small Business Innovation Research (SBIR) program and managed by the Army Research Office, an element of the U.S. Army Combat Capabilities Development Command's Army Research Laboratory, a new technology has been developed by Command Sight, Inc., to provide military working dogs with augmented reality goggles that allow a dog's handler to give it specific directional commands while keeping the warfighter remote and out of sight.

In 2017, Dr. A.J. Peper started Command Sight, a small business based in Seattle, to bridge human and animal communication. Through conversations with current and former military operators, he identified a need to increase the efficacy of communication between canine and handler. As a result, Command Sight built the first prototype of augmented reality glasses for military working dogs.

Peper said initial feedback from his proof of concept was, "The system could fundamentally change how military canines are deployed in the future."

The augmented reality goggles are specially designed to fit each dog with a visual indictor that allows the dog to be directed to a specific spot and react to the visual cue in the goggles. The handler can see everything the dog sees to provide it commands through the glasses.

"Augmented reality works differently for dogs than for humans," said Dr. Stephen Lee, an ARO senior scientist. "AR will be used to provide dogs with commands and cues; it's not for the dog to interact with it like a human does. This new technology offers us a critical tool to better communicate with military working dogs." The initial prototype is wired, keeping the dog on a leash, but researchers are working to make it wireless in the next phase of development.

"We are still in the beginning research stages of applying this technology to dogs, but the results from our initial research are extremely promising," Peper said. "Much of the research to date has been conducted with my rottweiler, Mater. His ability to generalize from other training to working through the AR goggles has been incredible. We still have a way to go from a basic science and development perspective before it will be ready for the wear and tear our military dogs will place on the units."

The basic science research behind this technology focuses on understanding canine vision and cognition as this tool is developed.

"We will be able to probe canine perception and behavior in a new way with this tool," Lee said.

Currently, military working dogs are commonly directed by hand signals, which require the handler to be within sight of the dog, or by laser pointers, which also required the handler to remain close to the dog and generates a light source, which could be a safety issue.

Audio communication, using a camera and a walkie talkie placed on the dog, is also used to direct the canines and allows the handler to be farther from the dog, but the verbal commands can lead to confusion for the dog; for example, a dog runs around a set of stairs rather than going up them. 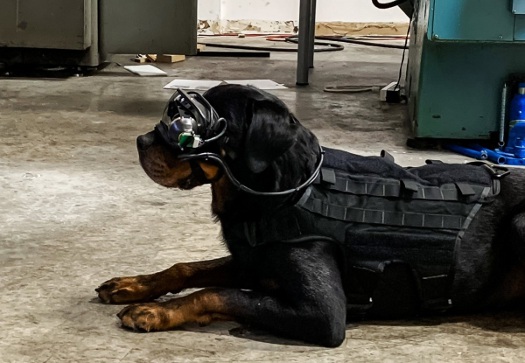 A new technology provides military working dogs with augmented reality goggles that allow a dog's handler to give it specific directional commands while keeping the warfighter remote and out of sight. [Photo courtesy: Command Sight]

"The military working dog community is very excited about the potential of this technology," Lee said. "This technology really cuts new ground and opens up possibilities that we haven't considered yet."

The augmented reality system uses goggles military working dogs have already been wearing for protection in inclement conditions and aerial deployments from Rex Specs. By leveraging a product the dogs are already used to wearing, Peper said it makes the technology adoption easier for both the dogs and the handler.

"Even without the augmented reality, this technology provides one of the best camera systems for military working dogs," Lee said. "Now, cameras are generally placed on a dog's back, but by putting the camera in the goggles, the handler can see exactly what the dogs sees, and it eliminates the bounce that comes from placing the camera on the dog's back."

The Command Sight team has completed the Phase I of the SBIR and was selected to continue to Phase II. The SBIR program funds research and technology development with small businesses using a three-phase process. In contrast to the basic research programs managed by ARO, the SBIR program focuses primarily on feasibility studies leading to prototype demonstration of technology for specific applications.

Additionally, the Department of Defense Rapid Reaction Technology Office has provided funding for the next phase of development. With that funding, Command Sight is now working with Navy Special Forces to build prototypes that will be tested on their military working dogs. Each of the dogs received a 3D scan to get dimensional data to understand where to place optics and electrical components, specific to each dog.

The researchers plan to spend the next two years developing a production-level wireless product. Once they have a prototype, they will get user feedback and revise the product for manufacturing.

"ARO has been a critical partner in making technical, training, and direct user connections to build ground swell of interest and secure funding sources," Peper said. "We're excited about getting this into the hands of the Soldier, hopefully in just a few years."