What's up with the U.S. Space Force? Is "Star Wars" just around the corner -- or is it already here? DOD gives update 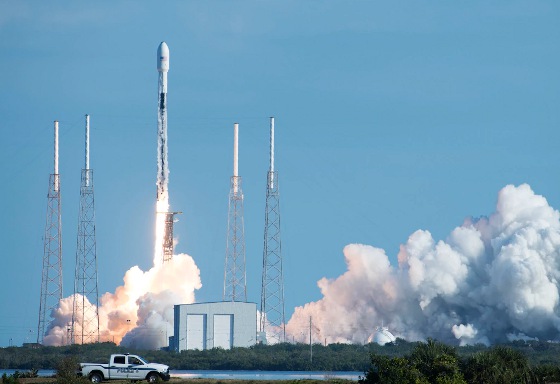 Why do we need a Space Force, and what does it aim to do? The Defense Secretary Dr. Mark T. Esper and the Chief of Space Operations Gen. John W. Raymond gave their updates in September at the Air Force Association's Virtual Air, Space & Cyber Conference. Is "Star Wars" just around the corner -- or is it already here? Here are the basics, in their own words ...

The secretary stated that America's air, space, and cyber warriors "will be at the forefront of tomorrow's high-end fight."

That means confronting near-peer competitors China and Russia. That means shifting the focus from defeating violent extremist groups to deterring great power competitors. It means fighting a high-intensity battle that combines all domains of warfare, he said.

"In this era of great power competition, we cannot take for granted the United States' long-held advantages," Esper said. 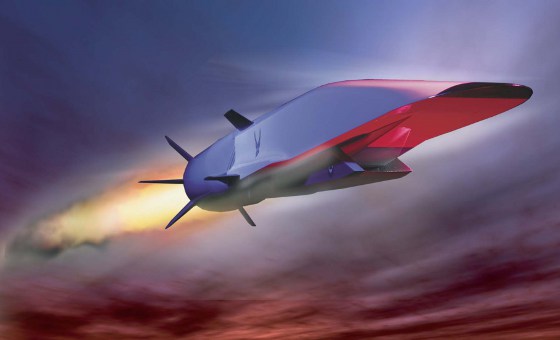 In 2013, Boeing's hypersonic scramjet X-51 Waverider experimental aircraft, which is designed to ride on its own shock wave and accelerate to about Mach 6, performed its first fully successful flight test for the Air Force Research Laboratory. It achieved a speed of just over Mach 5. Hypersonics will "revolutionize military affairs in the same fashion that stealth did a generation ago, and the turbojet engine did a generation before," according to an Air Force study. [U.S. Air Force image]

The last time an enemy force dropped a bomb on American troops was in the Korean War. "China and Russia seek to erode our longstanding dominance in air power through long-range fires, anti-access/area-denial systems, and other asymmetric capabilities designed to counter our strengths," he said. "Meanwhile, in space, Moscow and Beijing have turned a once peaceful arena into a warfighting domain."

China and Russia have placed weapons on satellites and are developing directed energy weapons to exploit U.S. systems "and chip away at our military advantage," he said.

Russia, China, North Korea, Iran, and some violent extremist groups also look to exploit cyberspace to undermine U.S. security without confronting American conventional overmatch. "They do this all in an increasingly 'gray zone' of engagement that keeps us in a perpetual state of competition," the secretary said.

The military guidebook for the future is the National Defense Strategy. The strategy calls on the military to divest legacy systems, reinvest savings in higher priority systems, and make the tough choices required to break from the status quo and continue outpacing the competition, Esper said.

The fiscal 2020 Defense Department research and development budget is the largest in history, he said, and it concentrates on critical technologies such as hypersonic weapons, directed energy, and autonomous systems.

"In the Air Force, specifically, we are modernizing our force for the 21st century with aircraft such as the B-21, the X-37, and the Next Generation Air Dominance platform," Esper said. "Equally important, we are transforming the way we fight through the implementation of novel concepts such as Dynamic Force Employment, which provides scalable options to employ the joint force while preserving our capabilities for major combat."

To realize the full potential of new concepts, the department must be able to exchange and synchronize information across systems, services, and platforms, seamlessly across all domains, he said. "The Department of the Air Force is leading on this front with the advancement of Joint All-Domain Command and Control," Esper said.

This concept is part of the development of a Joint Warfighting concept that will drive transition to all-domain operations, he said.

"For these breakthroughs to succeed in any future conflict ... we must maintain superiority in the ultimate high ground -- space," Esper said.

The military stood up U.S. Space Command a year ago, and Congress created the U.S. Space Force. The command is charged with operations, and the USSF looks to man, train, and equip the force. The new service has already submitted a budget and has released its first doctrine -- Spacepower.

Cyberwar is a distinct possibility, and DOD is looking to the department's Digital Modernization Strategy to improve our capabilities and policies, he said. The military is working on game-changing technologies, such as artificial intelligence and 5G, and looks to move the fight into the cloud.

The Air Force is on the leading edge of DOD efforts to harness the power of artificial intelligence. "In collaboration with academia and industry, the Air Force's AI Accelerator program is able to rapidly prototype cutting-edge innovation," Esper said. One example of this was the AI technology used to speed up the F-15EX acquisition program. 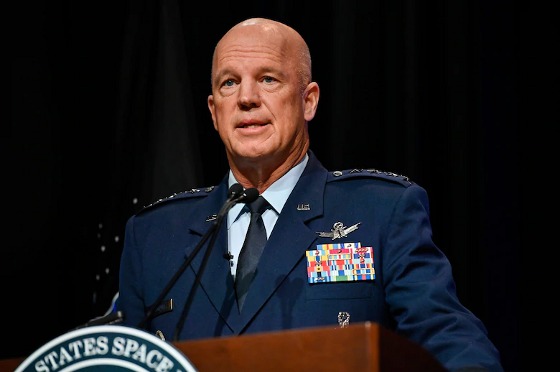 Chief of Space Operations Gen. John W. Raymond delivers remarks during a ceremony at the Pentagon transferring airmen into the U.S. Space Force, Arlington, VA, Sept. 15, 2020. About 300 airmen at bases worldwide, including 22 in the audience, transferred during the ceremony. [U.S. Air Force photo by Eric R. Dietrich]

Chief of Space Operations Gen. John (Jay) Raymond presented an ambitious blueprint Sept. 15 for cementing the nation's superiority in space while also forcing change closer to home by slashing bureaucracy, refocusing training, and instilling a culture across the Space Force that puts a premium on speed, technology, and innovation for "this digital service."

Noting "we are on the cusp of a tectonic shift in warfare," Raymond said during his keynote address on the second day of the Air Force Association's 2020 Air, Space & Cyber Conference that the law creating Space Force "gives us a huge opportunity to start with a clean sheet of paper to build a service from the ground up."

That opportunity, along with fresh thinking, he said, allows the Space Force to be "purpose built to compete, deter, win, and lead globally. And that is exactly what we are doing."

At the same time, Raymond was direct in explaining why nine months ago the Space Force became the first new and independent branch of the military since 1947 and why the U.S. must maintain its advantage in space.

"Our adversaries are moving deliberately and quickly in order to reduce our advantage," Raymond said. "... I'm not confident that we can achieve victory, or even compete, in a modern conflict without space power," he said. "And I am not willing to lose in order to learn."

Those twin imperatives -- the importance of space not just militarily but in everyday life and establishing a new model for creating and sustaining Space Force -- are central to his decisions and actions since Space Force was born, Raymond said.

"In order to be ready for this conflict, we must be bold," Raymond said. "We must innovate. We must move and think faster. And we must empower and leverage the outstanding talent we have in the Space Force. These imperatives are in the Space Force's DNA. ... I will accept moderate risk in order to innovate and experiment." 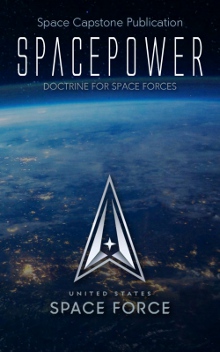 The U.S. Space Force has published a Spacepower Doctrine to help explain its whys and hows. You can read it by clicking on the cover image above.

The "warfighting architecture," he said, requires a "new design." The U.S. must "be able to meet the threat while reducing the first-mover advantage." The U.S. must also "have the ability to punch back. The unified command plan is clear; we must provide independent options in, through, and from space to ensure freedom of action in all domains."

Raymond offered examples for how that mindset translates in real terms.

Most important, he said, was publishing a Spacepower doctrine capturing the Space Force's "why" and "how."

"We know this doctrine is not perfect, but it lays the foundation for an intellectual dialogue on space. I encourage all space and air professionals to read it and throw your voice into the conversation," Raymond told the AFA's virtual audience, which numbered thousands of active-duty air and space personnel, industry officials, congressional staffers, and others.

The doctrine is important, he said, because operating in space, and fighting if necessary, is vastly different from any other military activity. "If deterrence fails, a war that begins or extends into space will be fought over great distances at tremendous speeds, both posing great challenges."

If that point was too vague, Raymond added detail.

"Direct ascent anti-satellite missiles can reach low earth orbit in minutes. Electronic attacks and directed energy weapons move at the speed of light, and on-orbit capabilities move at speeds greater than 17,500 mph," Raymond said. "To plan for warfare at these speeds and distances, we must be lean, agile, and fast."

The need to be nimble is why Raymond highlighted efforts to suppress any move toward a bloated bureaucracy. The goal, he said, is "shortening the distance between decision-makers and you, the experts conducting our mission."

Since the Space Force was created, "We have been in the business of slashing bureaucracy, delegating authority, and enhancing accountability," he said of a force that, when fully formed, is expected to number about 14,000, a total force that is far smaller than any other service or the Coast Guard.

"Big organizations are slow, and we must move at speed to outpace the threats we face," he said.

Holding to that need, Raymond said a reorganization has removed "two echelons of command" and that the original estimate of 1,000 Space Force staff at the Pentagon has been trimmed to 600. Raymond explained that the planning process is guided by four overarching ideas: fostering unity of effort across the department, reducing duplication of effort, slashing costs, and "increasing our speed."

Training, education, and recruiting are the backbone of that effort, he said. Noting the high-tech nature of the work, Raymond said the Space Force will bring 50 software coders to the force by the end of the year, and "We expect to grow this organic expertise in the years to come."

The larger goal, he said, is "to increase the digital fluency of the entire force."

The key to that effort is training.

"We have completely transformed our education and training from undergraduate to advanced follow-on courses -- all to ensure our operators have the knowledge and skills to compete," he said. "We've increased the rigor of courses and access to classified materials."

"Our expectation is that all Space Force members will speak a second language -- digital," he said.

Taken together, Raymond suggested that the Space Force's focus and the course it has charted are correct and a proper blend of old-school approaches and novel thinking.

"If we get this right, we will be the envy of the other services, because we are not tied to the past," Raymond said.