Low speed on a bumpy road is worst for vehicle body 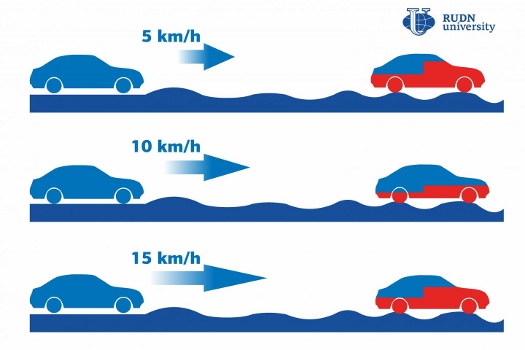 An associate professor from RUDN University in Russia has developed a computer model that describes all types of vehicle body damage caused by fatigue failure. According to his computer simulation, low speed on bumpy roads can be more dangerous for a vehicle body than proceeding at a moderate pace.

The results of the study can help measure fatigue resistance in vehicles more accurately. An article about the study was published December 2020 in the journal Simulation Modelling Practice and Theory.

A car on a bumpy road is subjected to different dynamic loads that can cause fatigue failure. Cyclical stress leads to the formation of micro-cracks, and after some time, spot-welded joints can fail.

The vehicle body structure is the main load-bearing part of the car. A vehicle body with damaged spot-welded joints has a lower level of vehicle crashworthiness. The level of fatigue resistance can be measured experimentally, but it requires a lot of expendable supplies and a testing site with special equipment. An associate professor from RUDN University created a mathematical model that describes all possible damages to spot-welded joints caused by fatigue failure. Using this model, the aim is to assess fatigue resistance of a car without conducting expensive experiments.

To develop the model, scientists used what is called the multibody dynamic method. It describes interactions within a system of details that move relative to one another. Then, the research team created a computer simulation in which the simulated car moved on different types of roads at different speeds. For example, type B was an almost perfectly smooth road with no bumps, and the model moved on it at the speed of 50, 70, and 90 km/h. Type E was assigned to the bumpiest of all roads, and the speed was only 5, 10, and 15 km/h. With four types of roads and three speeds on each of them, the team conducted 12 experiments in total.

"We modeled the movement of a vehicle on different types of roads and at different speeds and measured force and momentum at 12 suspension attachment points, that is, the points at which the suspension transmits the load to the body," said Kazem Reza Kasyzadeh, an associate professor at the Department of Mechanical and Instrumental Engineering of the Engineering Academy, RUDN University. "Each of these 12 points is affected by six force and momentum components. So, 72 values had to be calculated for each experiment."

The results of this study show that low speeds on bumpy roads can cause more body damage than medium speeds. For example, 100 spot-weld joints were damaged when the model moved repeatedly on a type E road at the speed of 5 km/h, while 50 were damaged at 15 km/h and 40 at 10 km/h.

According to the published paper, "The findings of this study revealed that the damage to the vehicle body is not always proportional to the vehicle velocity, and that depends on the degree of road roughness."

Moreover, the front of a vehicle body turned out to be twice as prone to damage than the rear, regardless of the speed and road type.

-- What do you think about these findings? Common sense or something new?