It is difficult to say what is impossible, for the dream of yesterday is the hope of today and the reality of tomorrow. -- Robert H. Goddard 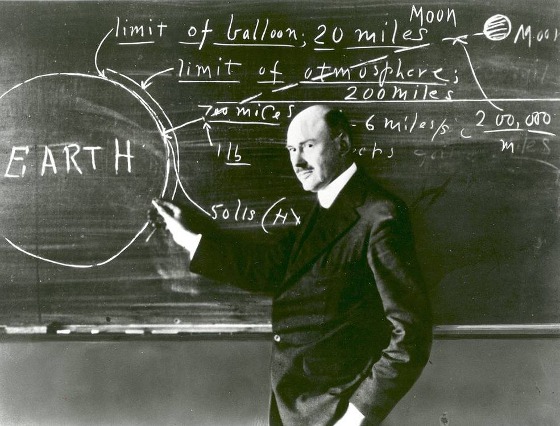 Robert H. Goddard (1882-1945) is recognized as the father of American rocketry and as one of the pioneers in the theoretical exploration of space. Goddard dreamt of exploring the Earth's upper atmosphere and, ultimately, space using rocket propulsion. Although his work was revolutionary, he received little public support for his research.

Following his theoretical work on the physics of rocketry, he began experimenting with different rocket engines. Believing that liquid propellants offered the most promise, he successfully launched the first liquid-fueled rocket on March 16, 1926, on a farm in Auburn, MA. His more advanced work and patents allowed American scientists to build, test, and fly more advanced rockets at the dawn of the Space Age. 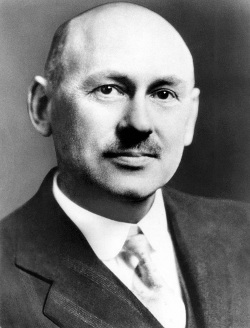 As a graduate student in 1909, he wrote his first paper on the feasibility of using liquid propellants to fuel rockets. In 1914, he registered his first two patents, describing a multi-stage rocket and a rocket fueled by solid or liquid propellants, respectively, both milestones in the history of rocketry.

While he self-funded his early research, he received a grant in 1917 from the Smithsonian Institution -- a then-unheard-of $5,000 -- for five years. Two years later, the Smithsonian published his manuscript, "A Method of Reaching Extreme Altitudes," which summarized his theoretical and experimental rocketry research.

He received little recognition from fellow scientists and some ridicule from the press for his seemingly outlandish ideas about space exploration. A Jan. 13, 1920, anonymous editorial in The New York Times scoffed at Goddard's ideas, erroneously pointing out that rockets could not work in the vacuum of space since they required air to push against to achieve thrust.

Goddard began experimenting with liquid-fueled rocket engines in September 1921, using gasoline as fuel and liquid oxygen as an oxidizer, successfully testing the first one a little more than two years later. After further refining the engine, Goddard was ready for its first flight.

On March 16, 1926, he set up his rocket, which he later called Nell, fueled with gasoline and liquid oxygen, on a farm in Auburn, MA. Goddard designed the rocket with the engine on top and the fuel and oxidizer tanks below, an unusual configuration by modern standards but one he thought would provide more stability. The rocket rose 41 feet in the air during its 2.5-second flight, landing 184 feet away in a cabbage field. A modest beginning, but like the Wright Brothers' first brief flight at Kitty Hawk, it ushered in a new era.

After a few more flight tests, Goddard realized that placing the rocket engine beneath the propellant tanks provided adequate stability and simplified the overall design. He also realized that the rockets needed additional stabilization with longer and longer flights, and he added movable vanes to the engine exhaust and gyroscopes to control the rocket's attitude.

Soon he outgrew his facilities in Massachusetts, and with famed aviator Charles Lindbergh promoting Goddard's efforts, the Guggenheim family provided funding for new and larger facilities in Roswell, NM. Despite this, Goddard's efforts remained underfunded, making his progress slow. The highest altitude that any of his rockets reached was about 9,000 feet. 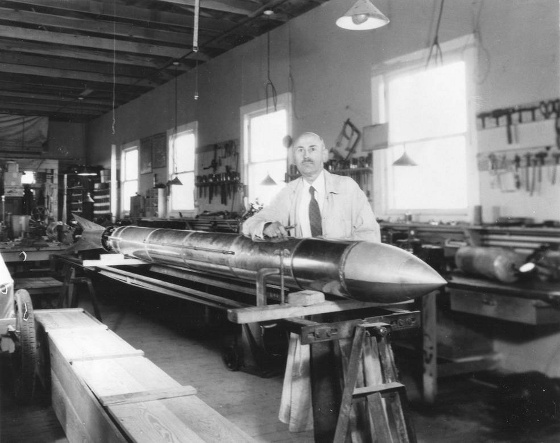 Robert H. Goddard working on a more advanced rocket in his workshop in Roswell, NM, in 1935.

While the U.S. government showed little interest in his rocketry research before World War II, other nations such as Germany and the Soviet Union studied his results to advance their own rocketry programs.

Goddard towing one of his rockets to the launch stand in Roswell.

On Aug. 10, 1945, Goddard died and did not live to see his dreams of his rockets reaching into space come true. Regarded as one of the great pioneers of rocketry, Goddard's research established the groundwork for American rocketry.

Speaking in 1963, Wernher von Braun, developer of many American rockets including the Saturn V that took astronauts to the Moon, reflected on Goddard's contribution to the space program, saying, "His rockets ... may have been rather crude by present-day standards, but they blazed the trail and incorporated many features used in our most modern rockets and space vehicles."

On May 1, 1959, the newly established National Aeronautics and Space Administration named the Goddard Space Flight Center in his honor.

On July 17, 1969, the day after Apollo 11 lifted off on its historic mission, and 49 years after its editorial scoffing at Goddard's ideas, The New York Times published a brief item under the headline "A Correction." The three-paragraph statement summarized its 1920 editorial, concluding:

"Further investigation and experimentation have confirmed the findings of Isaac Newton in the 17th Century, and it is now definitely established that a rocket can function in a vacuum as well as in an atmosphere. The Times regrets the error."