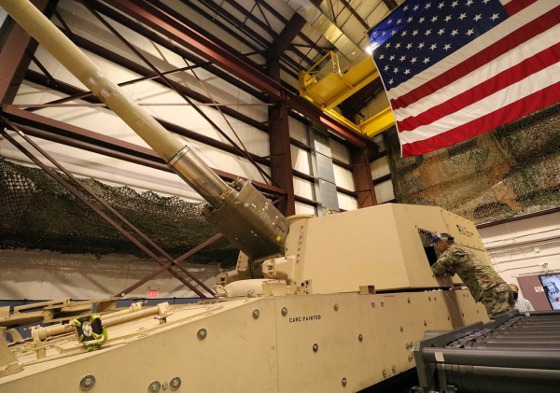 The autoloader for the Extended Range Canon Artillery is intended to speed up the rate of fire for greater lethality. In bottom right section of this photo, the Army Vice Chief of Staff, Gen. Joseph M. Martin, observes the second demonstration of the Extended Range Canon Artillery autoloader by observing the machinations through an ERCA opening. The demonstration was held at Picatinny Arsenal, NJ. [Credit: U.S. Army Combat Capabilities Development Command Armaments Center]

After a successful live-fire test of the Army's Extended Range Cannon Artillery (ERCA) limited-capacity autoloader at Yuma Proving Ground (Arizona) in June 2019, the Picatinny engineers who developed it have refined a faster autoloader and have succeeded in conducting its initial trials here at Picatinny Arsenal (New Jersey) in December 2020.

Development of the ERCA autoloader capability is notable because it would enable the cannon to fire at significantly faster rates, enhance lethality, and it may set the stage for future "optionally manned" artillery battery configurations where fewer -- or possibly no Soldiers -- would be required at the cannon during firing operations.

The autoloader is a machine that performs these well-orchestrated tasks, which have historically been performed by cannon crew members. The autoloader, however, can attain a rate of fire that is two to three times faster than a cannon crew, with limits to duration such as the cannon tube overheating, according to Armaments Center Project Engineer and ERCA Ammunition Handling System Lead, Jimmy Lee.

In November 2018, an earlier variant of the ERCA, the XM1299 howitzer, fired projectiles out to 72 km at Yuma, the farthest-reaching shots ever made by U.S. Army howitzers, and more than double the reach of currently fielded Army artillery systems.

In the demonstration in June 2019, an early science and technology ERCA prototype outfitted with a limited-capacity autoloader loaded five mass simulator high-velocity projectiles and five prototype XM657 Extended Range Supercharge propellant charges, and successively fired a five-round cannon "burst" downrange at a rate of seven-rounds-per-minute. The purpose of the demonstration was to inform development of the ERCA XM1299E1 according Armaments Center Project Officer for ERCA, Josiah Fay.

The limited-capacity autoloader was designed to handle only one type of projectile and charge, and it worked with a limited-capacity magazine, according to Lee. It was built to validate key aspects of the engineering approach during the march toward the objective autoloader, and the tests allowed the team to verify that key components would work as intended in realistic conditions, while close observation of its performance would inform future autoloaders.

Next up, according to Lee, was building and demonstrating the objective-capacity autoloader, which will be able to load and manage a suite of the Army's legacy and emerging fuzes, propellant charges, and projectiles, and it will work with larger capacity magazines. It is a more complex machine because projectiles, fuzes, and propellant charges come in different shapes, sizes, and weights, which requires the autoloader to handle a range of configurations to execute a fire mission.

Also, the newer autoloader must deliver at a higher rate while working in synchronization with the larger magazines, which store and manage the loads so that it will deliver the right combination of fuze, projectile, and propellant for the fire mission.

The Autoloader and other ERCA objectives
The ERCA system's development emerged as a formal research effort -- known as a "STO" for Science and Technology Objective -- following a 2013 study that assessed next-generation artillery. According to Lee, the main takeaway from the onset of the effort was that significantly increased range coupled with increased rates of fire was technologically within reach, and it would be a "game changer" for cannon artillery.

Lee added that a significant capability of the autoloader was that it portends future artillery battery configurations where a howitzer would perform fire missions without necessarily requiring that Soldiers be in the vehicle during the firing operations.

Along with the autoloader, prominent elements of the ERCA program include the XM1113 Rocket Assist Projectile and XM659 Stub Charge, which have been formally transitioned and are now managed by Project Manager Combat Ammunition Systems (PM CAS). There are also several versions of the "Supercharge" in various stages of development to support an increased range capability.

The cannon features a sliding block breech built to withstand the immense pressure of the supercharge and a cannon tube made with new alloys formed to a 30-ft length, which enables a projectile's velocity to continue increasing inside the cannon tube before exiting.

The ERCA armaments are fitted on an M109A7 "Paladin" chassis to form the self-propelled ERCA system.

After the June tests, the ERCA project teams had demonstrated independently both the interim range and rate-of-fire goals that were established during the STO phase.

The ERCA Integration Team is in the final stages of informing the LRPF CFT's Increased Rate of Fire capability with the XM1299E1 ERCA system, which is now integrated onto a M109A7 chassis with an optimized cab and full-capacity autoloader. Two more demonstrations are planned for fiscal year 2021 that will further validate autoloader technologies and greater rates of fire.

The December tests were part of the preparations for those demonstrations. In the tests, the engineers successfully fired multiple rounds using the objective-capacity autoloader at Picatinny's Ballistic Evaluation Center. It was the second time Picatinny facilities have live-fired integrated autoloader technologies from a Paladin platform, the first being a limited-capacity autoloader demonstration in June 2019.

The test objectives were to verify integrated hardware and software autoloader technology maturation in a live-fire environment prior to proceeding to full-scale testing at Yuma Proving Grounds.

"What we are seeing today is a result of Army investments in future cannon artillery technologies that are transitioning out of the Science and Technology phase and to Project Manager Self-Propelled Howitzer Systems under Section 804 Middle Tier Acquisition Authority as well as to PM CAS to equip the warfighter with more capability and further informing the ERCA Capability Development Document requirement," said Rich Granitzki, DEVCOM's Science and Technology advisor to LRPF CFT.

Going from virtual to actual Autoloader
The most challenging aspect of the objective-capacity autoloader's continued development revolves around the coordination of the motion controls and software testing that underpins the successful functioning of the complex system, said Lee.

"We always start work in software emulators," said Lee. "We have been maturing the software, running it in the lab, testing the design, and improving a lot of the simulations. We started with the virtual, and now we have hardware in the loop." Lee works with the Armaments Center's Principal Design Engineer, Bill Burgermeister.

"We take small steps to prove things out, and it grows bigger and bigger. We're at the point we're controlling almost every single aspect of the autoloader," said Lee.

"We have been building new components and maturing components so we can deliver the best product out there," said Lee. At this stage of the process, the job is to "prove out the design, prove out how things work, improve on the final," he said.

The June 2019 tests did inform the ongoing engineering for the objective-capacity autoloader, but mostly it confirmed that the system is on the right track.

Fay said the team verified that the fundamental architecture and ramming approach were correct, and they also validated their assumptions about component robustness to withstand environmental aspects that are truly unique to cannon artillery engineering: Violent, massive, and sudden releases of energy occurring within a cannon breech and shaking everything nearby -- and not so nearby.

"We were certainly putting more energy into the system, but that's one of the things we tracked early on, and now we're much more comfortable with those higher loads than when we first started out," said Fay.

The team also verified they need to continue, if not enhance, their teams-centered approach. "Rate of fire is a system-level effort," said Fay. "It isn't just the autoloader."

"The pointing has to be in the right place at the right time and not be moving while we're loading. If any of those things aren't there, we'll be waiting until those things happen before we can load, so getting it all to work together, it's a team effort," said Lee.

"The people doing the ammunition handling design work are familiar with the munition products that are being handled, this familiarity helps in the communications between the ammunition handling team and the munition teams on day-to-day design activities, this enables innovation and quick resolution of technical problems," said Fay. "It is just built into the fabric of the culture here."

Fortunately, the team is all in one place: "ERCA from the turret bearing up is a 100-percent Armaments Center-developed system," said Fay. "The ERCA armament and munitions have been thought about and innovation applied to them by the engineers at the Armaments Center for the XM1299, which gets' you the range, and XM1299E1, which gets you the rate of fire capability."

This is the first major re-design in a long time, Lee continued. "The Armaments Center is going through a renaissance period where we did a lot, an almost 100-percent in-house effort to design the cannon, the autoloader, and the breech design. In my lifetime here -- and I'm ancient -- I've never seen this much innovation and productive work."