Toyota Motor Co. has developed an all-in-one product that packages a hydrogen-electric fuel cell (FC) system into a compact module and plans to begin selling the system this year. The new module is designed for easy incorporation by companies that are developing and manufacturing FC products for a wide variety of applications, including mobility such as trucks, buses, trains, and ships, and stationary generators.

In addition to its effort to popularize fuel cell electric vehicles (FCEVs), Toyota aims to continue to strengthen its initiatives as an FC system supplier to promote hydrogen utilization through the popularization of FC products by working with various FC product partners. The focus is on reducing CO2 emissions to curtail global warming and to contribute to the achievement of carbon neutrality. 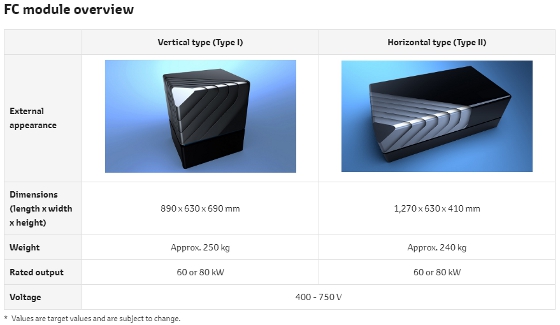 Toyota has been taking various initiatives toward the creation of a hydrogen society, or at least one that makes hydrogen an adopted fuel alternative, such as selling its Mirai FCEV and the SORA FCEV bus. It has also been selling FC systems to partner product companies and allowing the royalty-free use of its FCEV-related patent licenses. Through these efforts, the company has learned that many companies involved in FC products in a variety of industries are looking for FC systems that can be easily adapted to their own products.

To address these needs, Toyota has developed a product that packages the individual FC system-related products of its second-generation Toyota Mirai with enhanced performance, such as the FC stack, as well as components that handle air supply, hydrogen supply, cooling, and power control, into a single compact module. The new module is available in four models: a vertical type (Type I) and a horizontal type (Type II), with a rated output of either 60 kW or 80 kW for each.

Benefits: Versatility is key
The new module has a wide voltage range (400 to 750 V) and can be connected directly to an existing electrical vehicle that has a motor, inverter, and battery, etc., thanks to a built-in, dedicated FC boost converter that simplifies the development and manufacture of FC products. The system's modularization greatly improves convenience.

The module was designed to work in a broad range of operating environments, ensuring system operation at low or high temperatures, at higher altitude where the oxygen level is lower, and under applications involving vibration. 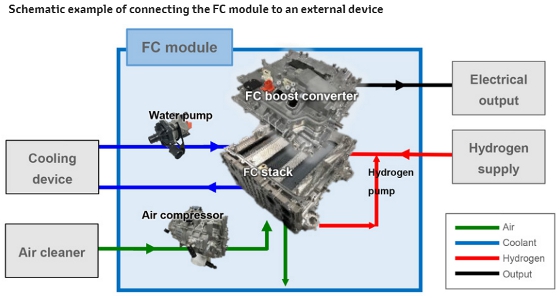 A neat feature is that the four module models can be combined according to the application, building in flexibility for adapting to the output level and amount of installation space available. Toyota says this modularization eliminates the need to create designs for individually installing FC system-related components and to connect individual components. It also integrates and decreases the number of locations the module must be connected to a device, allowing for easy installation.

To ensure safety related to the use of hydrogen and high voltage, the countermeasures cultivated during the development of electrified vehicles such as FCEVs and HEVs were implemented. These measures are based on the basic approach of ensuring that hydrogen does not leak and, in the unlikely event that any leaks should occur, ensuring their immediate detection and stoppage.

If FC product companies decide to use the module, they have the option to request the support of highly experienced Toyota engineers in determining the optimal layout and design according to fuel economy, usage duration, running cost, etc.

Toyota says the new module has achieved a world-class, top-level output density-per-unit volume by capitalizing on the characteristics of the compact Toyota FC system, which eliminated the humidifier by circulating the water generated during power generation inside the FC stack.

Lastly, Toyota says the maintenance requirements of the new module have been simplified and should be infrequent, helping to reduce the total cost, which includes procurement and usage, and even disposal.