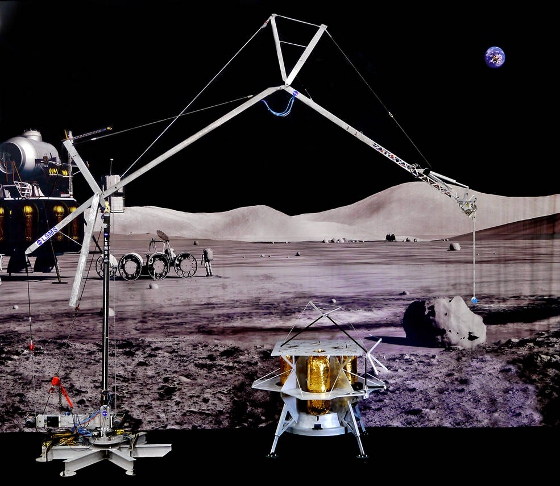 This lightweight robotic crane is comprised of a structurally efficient truss frame with cable actuation, and it mimics the movement of a human arm -- but with a much longer reach. It is scalable to fit any sized lander, vehicle, or surface application and can use a toolbox of quick-interchange end-effectors, or tools, that allow it to act as a hoist, forklift, regolith scoop, welder, and more.

"The unique thing about the LSMS is its dexterity and multi-functionality," said Barmac Taleghani, project manager at NASA's Langley Research Center in Hampton, VA.

The LSMS was first designed, built, and tested at Langley more than a decade ago to demonstrate the concept for offloading large payloads, such as habitats and rovers, from landers on human exploration missions. 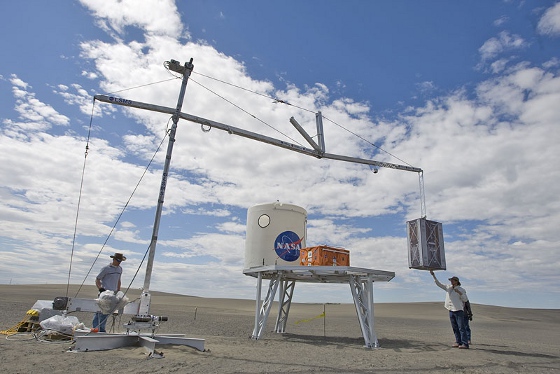 Early prototype of the LSMS moves a simulated lunar oxygen-generation plant from a lunar lander mockup to the surface back in 2008. [Credit: NASA/Sean Smith]

"We started thinking about additional tools that could be useful so that when you land the LSMS it could be used for multiple tasks," said Tom Jones, principal investigator. "You've already carried that mass there; why not reuse it?"

The original full-scale test article was sized for unloading a lunar lander. For that task or getting to high places, the arm and forearm is rotated up 45 degrees and extended as high as about 9 m (30 ft) above the surface. When reach is deemed more important, the unit can be configured as a horizontal boom that is 3.75 m (12 ft) tall and stretches out 7.5 m (25 ft).

In addition to heavy-duty tasks, the LSMS is designed to handle "light" payloads -- those too large or massive to be handled by astronauts. These payloads range from 100 to 3,000 kg (220 to 6,600 lb) and include things such as communications or power equipment, and even lunar rovers.

Although similar in structural design to a terrestrial crane, the LSMS uses a cable-driven actuation system to articulate its arm links and precisely maneuver payloads. [Credits: NASA]

Upgrades to LSMS since its initial development include a suite of new tools, such as a bucket truck end-effector for digging and maneuvering regolith, a forklift tine tool for lifting cargo pallets, and a welding tool, in addition to greater autonomous functionality.

Now the team is working to design, build, and test a proto-flight, or flight-like, version that could be demonstrated on a large cargo lunar lander. The ground demonstration work is funded through the Game Changing Development program within NASA's Space Technology Mission Directorate.

"As we establish a sustainable presence on the Moon under the Artemis missions, we will need to start setting up multiple elements, and there will be a wide range of tasks that could leverage the versatility and functionality of the LSMS," Jones said.

The new LSMS will be similar in size to the original prototype with about a 25-ft reach and will be able to lift payloads weighing around one metric ton on the Moon, equal to approximately 2,200 lb, or the size of an elephant. Upcoming Artemis missions carrying science instruments, technology demonstrations, and rovers will be in that payload size range.

The LSMS hardware will be space-rated and ready for further development that could make it compatible with one or more of the landers that are selected to go to the Moon.

"We're taking it to the level of having the proto-flight hardware built and tested under the current project," Jones said. "A follow-on project would develop the additional mechanical and electrical interfacing and software needed to integrate it with a lander."

Eventually, the goal is to demonstrate the technology at a range of sizes that could interface with the smaller commercial robotic landers up to larger landers like the Human Landing System.

"We're developing the analysis tools under this project so that we can design different size variants of LSMS fairly quickly for different missions," Jones said. "LSMS is designed to operate either on the Moon or Mars, or really any kind of planetary body. There may be different environmental concerns depending on the destination, but the hardware would be very similar."

In addition to the Game Changing Development project, when NASA first announced a return to the Moon, the team started looking at creating a smaller version of the LSMS for the smaller robotic landing missions that would precede a human mission. This mini-LSMS has about a 6-ft reach and could add a similar set of capabilities for offloading and other tasks to the Commercial Lunar Payload Services (CLPS) landers and could demonstrate the LSMS technology on the lunar surface at a smaller scale.

"There are some unique capabilities we could provide with that particular version, like possibly charging a rover," Jones said. "You could offload the rover with mini-LSMS and the rover could perform a mission, then return. Because the LSMS has a power connection at the tip, the rover could be recharged, enabling it to complete another mission."

In the future, Jones hopes to develop the technology further so it can eventually be mounted on a mobile platform.

"If LSMS could be mounted on a rover, you could have, for example, a mobile tool for digging and regolith operations, and you'd also be able to lift cargo off of a lander that has arrived," he said. "Using a mobile LSMS removes the need to land an offloading device on every mission, which is a big weight and cost savings."