The handheld or arm-mounted RS6 laser scanner available from Exact Metrology is designed for high-speed and high-accuracy scanning. When compared to other scanners, the RS6 has a 3x faster frame rate, a 30% wider laser stripe, and excellent scanning performance on difficult surfaces (including glossy black plastic automotive body parts or molded carbon fiber components). Its unique SHINE technology allows you to scan 99% of parts without touching the scanner exposure. It scans up to 1.2 million points/sec with a scan rate of 300 Hz.
Learn more.

EXAIR's patented Intellistat Ion Air Gun is a handheld and lightweight solution for static elimination in clean processes or sensitive assembly work such as scientific and electronic test facilities, laboratories, and clean rooms. The Intellistat was designed to consume minimal compressed air while simultaneously delivering precise blow-off, and exceptional static decay rates capable of reducing 1000 V to less than 100 V in less than a second at up to 24 in. away.
Learn more.

Scientists at Tokyo Institute of Technology (Tokyo Tech) have developed a wirelessly powered relay network for 5G systems. The proposed battery-free communication addresses the challenges of flexible deployment of relay networks. This design is both economical and energy efficient. Such advances in 5G communications could create tremendous opportunities for a wide range of sectors.

The ever-increasing demand for wireless data bandwidth shows no sign of slowing down in the near future. Millimeter wave, a short-wavelength spectrum, has shown great potential in 5G communications and beyond. To leverage high-capacity millimeter-wave frequencies, phased-array antennas (antenna elements that work together to boost signal strength in a specific direction) are being adapted. However, the current use case is confined to line-of-sight propagation. 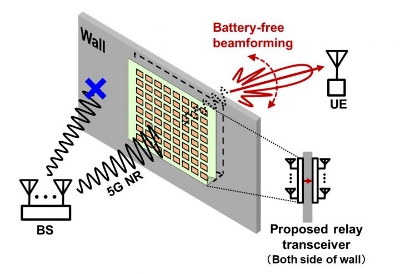 As a result, relay nodes are considered for non-line-of-sight communications (Figure 1). While relaying can provide improved bandwidth, coverage, and reliability, the flexible deployment of a relay network poses some challenges. The most significant challenge in relay networks is power supply. A typical relay node has its own power supply unit or is connected to an external power source.

Fortunately, a team of scientists from Tokyo Tech, led by Prof. Kenichi Okada, have proposed a wirelessly powered 28-GHz phased-array relay transceiver for the 5G network. Their work is scheduled for presentation in the 2021 Symposia on VLSI Technology and Circuits, an international conference (June 13-19, 2021) where emerging trends and novel concepts on semiconductor technology and circuits are explored. 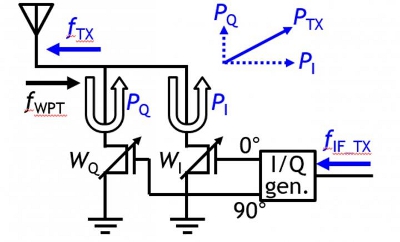 A vector-summing backscattering technique is used to realize the proposed design. The transmitter works as a backscatter with 24-GHz local oscillator (LO) and 4-GHz intermediate frequency (IF) signals (Figure 2).

"Backscatter communication makes it possible to harvest energy from incident signals and reflects back parts of the same signals while modulating the data," explained Okada. "In this design, backscatter up-converts the 5G New Radio (5G NR) spectrum at 4 GHz and transmits at 28 GHz."

The transmitter also acts as a phase shifter, allowing it to alter the phase of an incoming signal. The backscattering and phase-shifting capabilities of the transmitter facilitate beamforming, wherein an array of antennas can be controlled to transmit signals in a specific direction. As a result, information is transferred more efficiently with less interference.

The receiver and rectifier operation is another critical feature of the transceiver. Passive phase shifters and power combiners (which combine power fed at multiple ports) are used to boost the received signal power for wireless power transfer (WPT). The proposed rectifier acts as a self-heterodyne mixer. In other words, the rectifier splits and recombines an incoming beam with a modulated version of itself. It also works as a full-wave rectifier with the 24-GHz WPT signal. 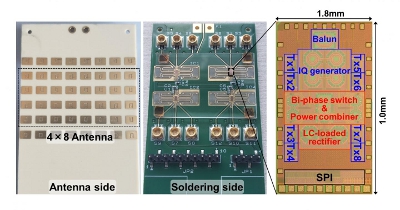 The entire phased-array relay transceiver is configured in an area as small as 1.8 mm2 (Figure 3). In the receive mode, the wirelessly powered 4x8 array module produces 3.1-mW of power. In the transmit mode, it produces -2.2 dBm of saturated Equivalent Isotropic Radiated Power (EIRP), which is the output power radiated from an antenna in a single direction. The vector-summing backscatter covers a 360Â° phase range with 7-bit phase resolution while consuming just 0.03 mW in both transmit and receive mode.

"The proposed battery-free transceiver enhances 5G connectivity by serving as a repeater between indoor and outdoor environments," said Okada. "This, in turn, will improve user experiences and create new opportunities for operational efficiency in internet-of-things, industrial automation, and new communication services."