Scientists at Sandia National Laboratories have built the world's smallest and best acoustic amplifier -- and they did it using a concept that was all but abandoned for almost 50 years.

According to a paper published May 13 in Nature Communications, the device is more than 10 times more effective than the earlier versions. The design and future research directions hold promise for smaller wireless technology. 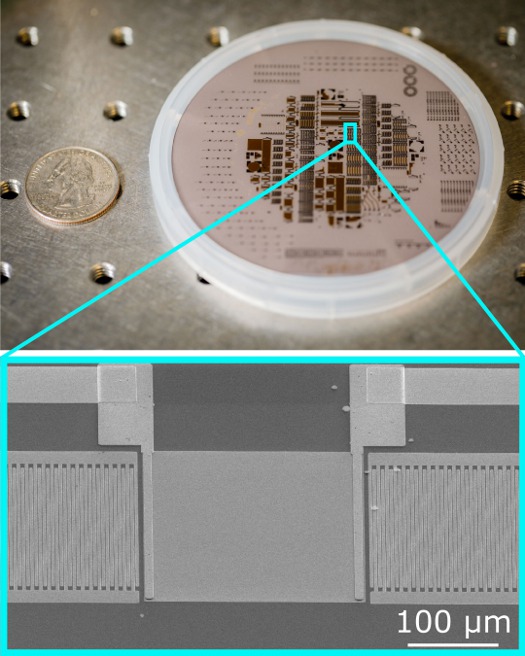 Modern cell phones are packed with radios to send and receive phone calls, text messages, and high-speed data. The more radios in a device, the more it can do. While most radio components, including amplifiers, are electronic, they can potentially be made smaller and better as acoustic devices. This means they would use sound waves instead of electrons to process radio signals.

"Acoustic wave devices are inherently compact because the wavelengths of sound at these frequencies are so small -- smaller than the diameter of human hair," Sandia scientist Lisa Hackett said. But until now, using sound waves has been impossible for many of these components.

Sandia's acoustic, 276-MHz amplifier, measuring a mere 0.0008 in.2 (0.5 mm2), demonstrates the vast, largely untapped potential for making radios smaller through acoustics. To amplify 2-GHz frequencies, which carry much of modern cell phone traffic, the device would be even smaller, 0.00003 in.2 (0.02 mm2), a footprint that would comfortably fit inside a grain of table salt and is more than 10 times smaller than current state-of-the-art technologies.

"We are the first to show that it's practical to make the functions that are normally being done in the electronic domain in the acoustic domain," Eichenfield said.

Resurrecting a decades-old design
Scientists tried making acoustic radio-frequency amplifiers decades ago, but the last major academic papers from these efforts were published in the 1970s.

Without modern nanofabrication technologies, their devices performed too poorly to be useful. Boosting a signal by a factor of 100 with the old devices required 0.4 in. (1 cm) of space and 2,000 V of electricity. They also generated lots of heat, requiring more than 500 mW of power.

Previous researchers hit a dead end trying to enhance acoustic devices, which are not capable of amplification or circulation on their own, by using layers of semiconductor materials. For their concept to work well, the added material must be very thin and very high quality, but scientists only had techniques to make one or the other. 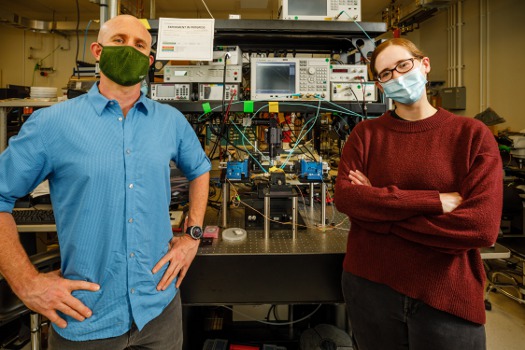 Decades later, Sandia developed techniques to do both in order to improve photovoltaic cells by adding a series of thin layers of semiconducting materials. The Sandia scientist leading that effort happened to share an office with Eichenfield.

"I had some pretty heavy peripheral exposure. I heard about it all the time in my office," Eichenfield said. "So fast forward probably three years later, I was reading these papers out of curiosity about this acousto-electric amplifier work and reading about what they tried to do, and I realized that this work that Sandia had done to develop these techniques for essentially taking very, very thin semiconductors and transferring them onto other materials was exactly what we would need to make these devices realize all their promise."

Sandia made its amplifier with semiconductor materials that are 83 layers of atoms thick -- 1,000 times thinner than a human hair.

Fusing an ultrathin semiconducting layer onto a dissimilar acoustic device took an intricate process of growing crystals on top of other crystals, bonding them to yet other crystals, and then chemically removing 99.99% of the materials to produce a perfectly smooth contact surface. Nanofabrication methods like this are collectively called heterogeneous integration and are a research area of growing interest at Sandia's Microsystems Engineering, Science and Applications complex and throughout the semiconductor industry.

Amplifiers, circulators, and filters are normally produced separately because they are dissimilar technologies, but Sandia produced them all on the same acousto-electric chip. The more technologies that can be made on the same chip, the simpler and more efficient manufacturing becomes. The team's research shows that the remaining radio signal processing components could conceivably be made as extensions of the devices already demonstrated.

Work was funded by Sandia's Laboratory Directed Research and Development program and the Center for Integrated Nanotechnologies, a user facility jointly operated by Sandia and Los Alamos national laboratories.

So how long until these petite radio parts are inside your phone? Probably not for a while, Eichenfield said. Converting mass-produced, commercial products like cell phones to all acousto-electric technology would require a massive overhaul of the manufacturing infrastructure, he said. But for small productions of specialized devices, the technology holds more immediate promise.

The Sandia team is now exploring whether they can adapt their technology to improve all-optical signal processing too. They are also interested in finding out if the technology can help isolate and manipulate single quanta of sound, called phonons, which would potentially make it useful for controlling and making measurements in some quantum computers.