Surgical robotics systems offer an overwhelming advantage over traditional methods: improved precision and speed, faster patient healing, and a reduced margin of error. For minimally invasive procedures requiring this level of precision, performance, and reliability, the engineers of surgical robotics systems depend on FAULHABER motion systems.
Read the full article.

Pick, measure, and sort small parts with one robotic workstation

Because of their small dimensions, voice coil motors are often integrated in compact stages, actuators, and fast tip/tilt mirror platforms. These devices are driven by an electromagnetic motor consisting of a moving coil winding and a fixed magnet (the opposite is also possible). By precisely controlling the electric current in the coil, the magnetic force (Lorenz force) -- and thus, acceleration, velocity, and position -- can be varied very accurately.
Learn all about voice coil stages and actuators from PI.

With the GP56-N series, the Nanotec product line now also includes low-noise planetary gearboxes for brushless DC motors and stepper motors with flange size 56 and 60 mm. They are ideally suited for applications in medical devices and building automation. The helical toothing allows the teeth to mesh gradually, which results in a smoother transmission of forces so that vibrations and noise are reduced. Planetary gears and the ring gear consist of a high-quality, low-wear plastic, making the new gearboxes quieter than conventional, straight-geared metal gearboxes. Available in one- and two-stage versions in nine different reductions and varying output torques.
Learn more.

Stock Drive Products / Sterling Instrument (SDP/SI) has introduced new speed reducers with traction drive technology. Featuring a gearless drive, these speed reducers are highly efficient and feature only six moving parts. They use engineered traction fluid to cool and lubricate, and they generate less heat than conventional drives. Years of development and testing have been invested in this new technology, resulting in a product featuring infinite ratios up to a ratio of 5:1, dramatic reduction of motor torque ripple, low vibration and noise level, and significantly less maintenance than a conventional gearbox.
Learn more.

When developing the high-resolution Panoramic Camera on the ExoMars Rover, engineers looked for motors that were extremely compact and could also deliver reliable and precise positioning for the camera-focusing mechanism. FAULHABER Stepper motors were selected for the job, as they precisely position objects with a resolution of 1280 steps per revolution without the need for a separate feedback system, and are more rugged and sturdy than conventional servo motors.
Read the full article.

German automotive industry supplier MAHLE is currently developing a new, highly efficient magnet-free electric motor that does not require rare-earth elements and costs less to produce. The company says the motor's efficiency level has only been achieved by Formula E racing cars so far.
Read the full article.

With its new Sinamics G115D, Siemens is introducing a compact and powerful drive system specifically designed for horizontal conveyor applications. The IP-rated system comprises the motor, drive, and gearbox in one unit and is offered in two versions: wall mounted and motor mounted. It is suitable for applications in intra-logistics and airports, as well as in the automotive and food and beverage industries.
Learn more.

FANUC America has just introduced the LR Mate 200iD/14L, the 10th model variation of its popular LR Mate series of tabletop industrial robots. Since the LR Mate series was launched nearly 30 years ago, it has become one of FANUC's biggest sellers, with over 70,000 units installed across the globe. The LR Mate 200iD/14L allows the highest payload of the LR Mate series, handling parts weighing up to 14 kg in the automotive, e-commerce and warehousing, food and beverage, medical device, pharmaceutical, and many other industries.
Find the right LR Mate for your application.

Recognition Robotics offers its complete Robeye visual guidance system that includes all the components needed to guide any major industrial robot. This industry-proven technology with potential for hundreds of applications is currently running production in multiple automotive OEMs. Benefits include quick-and-easy setup, simplified line feeding (for things like pre-centering tooling, conveyors, high-precision racks and rack stands), reduced production time, increased flexibility, and no CAD data or calibration required for new tasks. Just connect, teach, and recognize -- all in less than five minutes. The Robeye Espresso Starter Kit includes everything you need to get underway.
Learn more about the system.
Learn about Robeye in De-racking Applications.

The new Cobot Welder from Hirebotics is a major leap forward in easy-to-use welding automation that combines industrial-grade robot welding functionality with consumer-level ease-of-use and a phenomenal price point -- especially for small and medium-size businesses. The Cobot Welder's app programmability decreases the time required to teach a new part by 60%. A Hirebotics/Universal Robots launch event will be held April 28.
Read the full article.

SDP/SI offers a new, low-backlash variant of its existing line of multi-plate in-line slip clutches. Both versions feature an all-mechanical design, which makes them considerably cheaper than electromechanical alternatives. These clutches are commonly used for overload protection to prevent injury and machine failure, but have a wide variety of other applications such as tension control and positioning retention hinges like the ones in reclining chairs. The slip plates are layered with friction pads in between, and an adjusting nut sets the slip torque by squeezing the plates together. The outer plates are tabbed to fit into the output housing and the inner plates are connected to the input hub, so the two ends disengage from one another upon slipping.
View the video.

One day in the near future dyes in electric motors might indicate when cable insulation is becoming brittle and the motor needs replacing. Scientists at Martin Luther University Halle-Wittenberg (MLU) in Germany, together with ELANTAS, a division of the specialty chemicals group ALTANA, have developed a new process that enables the dyes to be directly integrated into the insulation. By changing color, they reveal how much the insulating resin layer around the copper wires in the motor has degraded. The results were published in the journal Advanced Materials.

Modern combustion engines have long had detectors that recognize, for example, when an oil change is needed, saving unnecessary inspections. Electric motors also show signs of wear. Inside, they are usually made up of tightly wound copper wires -- and these in turn are coated with an insulating resin. "This insulation changes over time. It becomes brittle as it degrades due to heat and chemical processes," explains Professor Wolfgang Binder from the Institute of Chemistry at MLU. However, it is not possible to tell from the outside whether the insulation around the wires inside is still intact or whether the entire motor needs to be replaced. 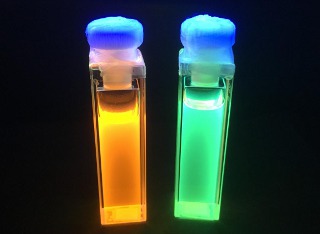 This dye added to a resin system changes color when an alcohol that is released by the resin binds to it. [Credit: Uni Halle/Alexander Funtan]

The scientists from MLU were tasked with finding a solution to this problem on behalf of the ELANTAS division of ALTANA, which produces special resin systems for such insulation. "Until now, developers have focused on the degree to which material degrades under specific conditions," explains Alexander Funtan, a chemist at MLU. Recommendations were then made as to how long it would take before a replacement would be necessary. However, the actual wear depends on the conditions under which it is used, most particularly temperature. Funtan developed a test rig that he used to analyze four different resin systems over several months to determine which degradation products form at different temperatures.

He discovered that the four resin systems consistently released a specific alcohol under the different temperature conditions. "We then worked closely with the researchers and developers at ELANTAS to find a sensor molecule for this alcohol," he says. In other words, a substance that is easily detectable and whose properties change when the alcohol binds to it. The sensor molecule must also withstand high temperatures and normal production processes. Another requirement was that it did not change the insulation's electrochemical properties. The choice fell on a dye that normally glows reddish orange under UV light; but when alcohol binds to it, the color spectrum shifts to a light green.

The different color spectra could then be analyzed using special devices that could be installed directly in the engine. "This way, you can see if a replacement is necessary without having to open up the engine," says Binder. This will hopefully avoid unnecessary motor replacements in the future. The new insulation could be used in the motors of electric vehicles as well as in machines and other equipment. "These results reveal what can be achieved by combining basic university research with commercial application know-how," says Dr. Simon Rost, head of research and development at ELANTAS in Hamburg. "In the future, this will enable us to provide added value to our customers and further contribute to sustainable development."

ELANTAS has filed a patent for the new process.