A major upgrade to the world's largest outdoor earthquake simulator at the University of California San Diego (UCSD) reached a milestone mid-April when the facility's floor -- all 300,000 lb of it -- was put back into place. When completed this fall, the simulator will have the ability to reproduce multi-dimensional earthquake motions with unprecedented accuracy to make structures and their residents safer during strong shakes.

The simulator, or shake table, will be able to test the heavy and tall structures to gauge how well they would withstand various types of earthquakes. The shake table will be equipped with the ability to reproduce all the six possible movements of the ground, known as six degrees of freedom. The first test following the upgrade will feature a full-scale, 10-story, cross-laminated timber building.

"This facility will save a large number of human lives by making the places we live and work in safer during earthquakes," said Joel Conte, the shake table's principal investigator and a professor of structural engineering at UCSD. Conte and colleagues lay out the details of the upgrade in a paper published in January 2021 in Frontiers in Built Environment.

In the paper, researchers also detail the impact that the shake table has had on building and design codes since it opened in 2004.

In San Francisco, approximately 6,000 "soft-story" wood-frame buildings are being retrofitted to make them safer in strong earthquakes. Full-scale testing of retrofit systems for these soft-story wood-frame buildings was performed on the UC San Diego shake table in 2013. Professor John van de Lindt from Colorado State University, who led this project, played a key role in writing the guidelines for the retrofit of these buildings. 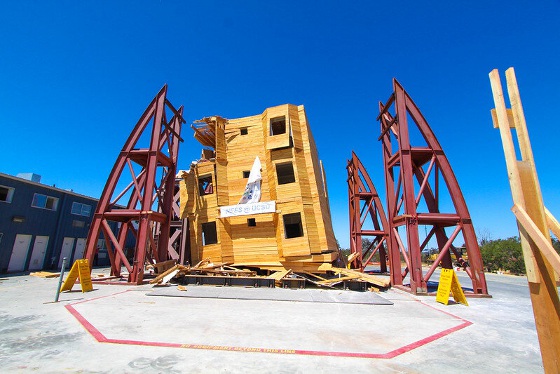 In 2008, a test led by Professors Robert Fleischman of the University of Arizona and Jose Restrepo of UC San Diego led to new recommendations on how precast concrete floors, known as diaphragms, should be built into parking garage structures to improve their seismic behavior.

In 2011 and 2012, during a series of landmark tests, a team tested elevators and stairs inside a full-size, six-story building. The findings led to new, better guidelines for the way these components should be connected to buildings' structural frames so they don't detach during a quake.

How it works
The principle behind the table is relatively simple: various structures are built on top of the facility's floor, or platen, which is connected to a series of horizontal and vertical actuators, or pistons, that move back and forth, simulating earthquake motions. The movements follow precise earthquake records that researchers have gathered from around the world. 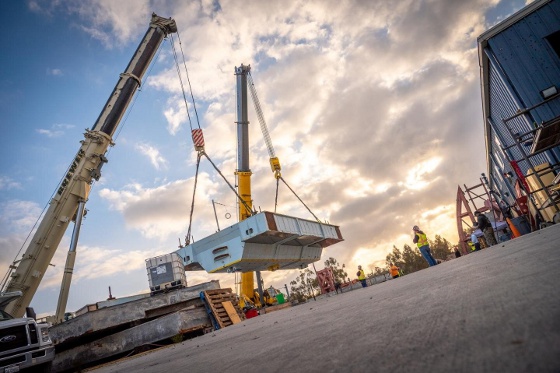 The shake table's platen, or floor, is put back into place by two cranes at the Englekirk Structural Engineering Center at UC San Diego. [Credit: University of California San Diego]

The facility is transitioning from one degree of freedom -- the ability to move structures backwards and forwards -- to six degrees of freedom, adding the ability to move up and down, left to right, as well as pitch, roll, and yaw motions. To understand these last three, think of an airplane in flight: pitch is when the nose of the airplane goes up and its tail goes down; roll is when one wing dips and the other lifts; and yaw is when the plane's whole body slides from left to right.

Two additional horizontal actuators were added to two existing ones in a new configuration in order to move the table horizontally forward and backward, left to right, and to make a yaw motion. The six existing actuators that move the table up and down were hooked up to a new, stronger hydraulic power source. 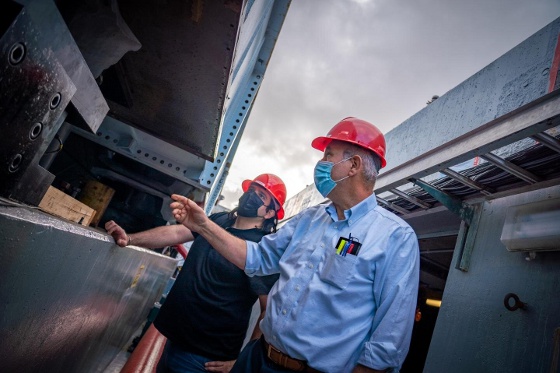 Why do six degrees of freedom matter?
Reproducing earthquake motions in six degrees of freedom is key because during a temblor, the ground might move in more than one direction. For example, during the 1994 Northridge earthquake in the Los Angeles area, bridge columns punched through bridge decks, hinting at a strong vertical ground motion component. Similarly, during the 1971 San Fernando earthquake, the buildings twisted and swayed, hinting that the ground was probably rotating.

Principal investigator Conte says he believes results of prior tests would have revealed additional ways to make buildings safer if they had been done in six degrees of freedom rather than one.

More power, better sensors
The upgrade will also add a new, state-of-the-art sensing and data collection system with a total of 768 channels to carry information coming from a wide range of sensors, including high-definition cameras, strain gauges, accelerometers, and more. The software controlling the shake table also will be upgraded.

In addition, the mechanism that powers the shake table has been expanded. It is connected to a hydraulic power system that has had its capacity quadrupled.