Storing the rechargeable batteries at sub-freezing temperatures can crack the battery cathode and separate it from other parts of the battery, a new study shows.

Lithium-ion batteries are a bit famous for their poor cold-weather performance, and that has consequences for some of their most important applications -- everything from starting an electric car in a Wisconsin winter to flying a drone on Mars.

Now, researchers at the Department of Energy's SLAC National Accelerator Laboratory have identified an overlooked aspect of the problem: Storing lithium-ion batteries at below-freezing temperatures can crack some parts of the battery and separate them from surrounding materials, reducing their electric storage capacity. 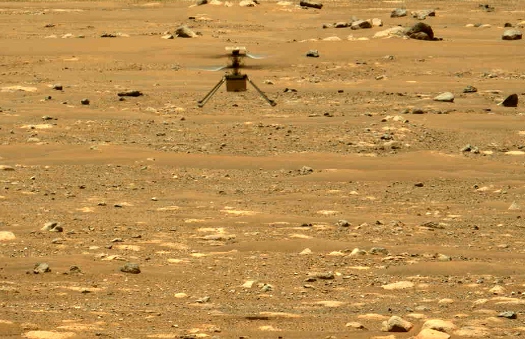 The drone Ingenuity as seen by NASA's Mars Perseverance rover on the Red Planet. SLAC researchers are working to understand the effects of the extreme temperatures of distant planets -- or Midwest winters -- on the rechargeable batteries that power devices like these. [Credit: NASA/JPL-Caltech/Arizona State University/Malin Space Science Systems]

SLAC scientist Yijin Liu and postdoctoral fellow Jizhou Li made the discovery while looking at the cold-weather performance of the cathode, the part of the battery electrons flow into when it's in use. Initial studies found that storing cathodes at temperatures below zero degrees Celsius led batteries to lose up to 5% more of their capacity after 100 charges than batteries stored at warmer temperatures.

To understand why, the researchers turned to a combination of X-ray analysis methods at SLAC's Stanford Synchrotron Radiation Lightsource and machine learning techniques that Li has been working on over the last several years. The combination allows them to identify individual cathode particles -- meaning the team could study thousands of particles at once, compared to just the handful they could identify with their eyes alone.

Together, those methods revealed that cold temperatures were shrinking the meatball-like particles within the cathode and in the process cracking them -- or making existing cracks even worse, Liu said. Since materials differ in the way they expand and contract in response to changing temperatures, extreme cold was also detaching the cathodes from surrounding materials.

The results point to some possible fixes, Liu said. By looking for battery materials that are better matched in terms of their temperature response, scientists could address the detachment issue. Doing so could help improve other batteries as well, since all batteries expand and contract as they heat up and cool down. By engineering different particle structures inside a battery -- notably, building them up from smoother, less meatball-like particles -- researchers could also help prevent cracking and improve long-term lithium-ion battery capacity.

The research was published in Advanced Energy Materials on August 21, 2021.

SLAC is operated by Stanford University for the U.S. Department of Energy's Office of Science.