In storms or other turbulence, pilots need to know how the plane is orientated and the angle at which the plane is tilted toward Earth's surface. If the plane's nose is tilted downward at a 45-degree angle, for example, they need to counter the angle and direction to maintain altitude.

Yet, the sensor responsible for measuring such critical information requires complex external circuits, and its internal mechanisms can drift over time, resulting in an accumulation of errors.

To improve the tilt sensor, Hiroki Ota, associate professor, and his graduate student, Ryosuke Matsuda, in the Department of Mechanical Engineering at Yokohama National University in Japan, have developed a small, simplified version of the sensor that can be scaled for various applications. They published their approach July 21 in Advanced Materials Technologies. 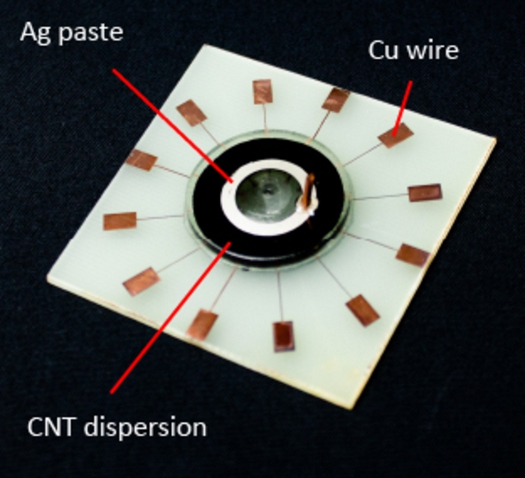 "For further application of tilt sensors, a simple measurement system is essential," said Ota. "In this study, we developed a sensor that can detect tilt by simply turning a direct current on and off using a conductive liquid material."

Conventional tilt sensors consist of sub-sensors to measure acceleration and angular rate against the vibrations of the host object, like an airplane or a person outfitted with a wearable device. The measurements must be processed through external circuitry before they can be understood as the tilt calculation. More contemporary systems use liquid electrolytes to measure the tilt state electrically, where the liquid triggers an alternating current that signals the tilt angle and direction. But, according to Ota, alternating current is complex and also requires external circuitry for processing.

"Conventional tilt sensors using an electrolyte require alternating current, making it difficult to reduce the size of the system," Ota said. "The sensor fabricated in this study has a digital output using direct current, which enables direct electrical measurement of tilt."

Electrolytes do not conduct current, so the researchers selected a liquid composed of carbon nanotubes dispersed in water.

"By using a highly fluid conductive liquid, the sensor can measure not only the tilt direction but also the angle in one direction," Ota said.

The liquid provides conductivity according to the inclination direction, which is obtained from an electrical on-off signal from direct current electrodes. The liquid moves freely in the direction of the incline, while a space that amounts to an air pocket moves in the opposite direction.

"In the tilted state, the air pocket moves to switch the conduction and insulation of the electrodes," Ota said. "This feature offers the advantage that the inclination direction can be detected without any external calculation mechanisms."

The researchers successfully tested the sensor on a three-pronged device that, when tilted, heated a balloon under the downward prong. The balloon would expand and lift the prong to make the device horizontal, cutting off the power to the heater. They also tested the sensor as a motion-tracking device, strapping it to the head of a researcher who tilted his head in various directions, all of which were accurately mapped.

"The device fabricated in this study can measure the tilt angle using a functional liquid," Ota said. "In the future, we aim to extend this function to create a multi-physical sensor that can simultaneously measure other physical quantities such as pressure and strain deformation."

The researchers plan to implement their sensors as a less cumbersome option for wearable devices and robots with limited installation room, according to Ota.