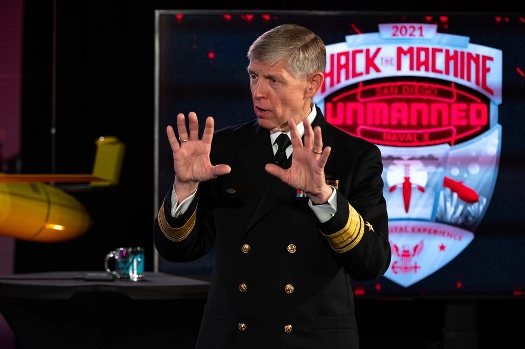 Rear Adm. Lorin Selby, chief of naval research, delivers remarks at the "HACKtheMACHINE" unmanned competition in Alexandria, VA, Nov. 17, 2021. HACKtheMACHINE Unmanned is the first in a series of public-facing technology challenges aimed at accelerating discovery and teambuilding between the Navy, industry, and academia for the creation of groundbreaking unmanned and autonomous systems. [Credit: U.S. Navy photo by Michael Walls]

Declaring "Our time to innovate is now," Chief of Naval Research (CNR) Rear Adm. Lorin C. Selby introduced a new vision for future naval power Nov. 17, 2021 -- one based on faster development of unmanned, autonomous systems, vibrant partnerships with industry and academia, and reimagined naval formations. "I think this decade, the 2020s, will have special significance for our nation and our role in leading the world," Selby told a nationwide audience during the HACKtheMACHINE Unmanned event. "What can we do today that can deliver measurable results in two years, that leads to deployed capabilities at scale in five years, to fully realize that reimagined future?"

Small, agile, many
A critical important component of future naval success, Selby said, is incorporating advanced cyber-physical technologies found in "the small, the agile, and the many" -- small unmanned, autonomous platforms that have the agility to be built and adapted quickly, in large numbers, and at far lower costs compared to larger platforms. These unmanned air, surface, and subsurface vehicles will carry an array of sensors and modern payloads, and perform multiple missions.

"The small, the agile, and the many have the strong potential to define the future in a world where the large and the complex are either too expensive to generate in mass, or potentially too vulnerable to put at risk," he said.

"We are talking about how to iterate at scale and at speed. How to take things that meet operational needs and making them part of the force structure, deploying them in novel naval formations" that will "confuse and confound the tasks our adversaries must consider."

One of the advantages of "the small, agile, and many" platforms in this new formation is that Selby believes they can be built relatively inexpensively compared to existing force structure. This makes them more "attritable" in high-end conflict -- in other words, if they are shot down or otherwise put out of action, American forces will have dozens, even thousands, of backups in place. Having large numbers of advanced but inexpensive platforms in the fleet to counter an adversary's expensive platforms could play an important role in deterring aggressive actions.

Selby gave his remarks during a keynote address at the HACKtheMACHINE Unmanned competition, held virtually Nov. 16-19. This event, which is expanding to multiple cities across the country, is a public-facing technology challenge aimed at accelerating discovery and team building between the Department of the Navy (DoN), industry, and academia.

The ultimate goal of such events, Selby said, is to create new ways of doing business for autonomous and software-based systems. Comparing this moment in history to the dawn of the Industrial Revolution, when technological advances drove massive change, he noted that today, "data is the new oil, and software is the new steel."

Sponsored by the Office of Naval Research (ONR), in conjunction with Program Executive Office (PEO) C41, PEO Integrated Warfare Systems, PEO Unmanned and Small Combatants, the Navy's Cybersecurity Office (PMW-130), and industry partners like Fathom5 and Booz Allen Hamilton, HACKtheMACHINE Unmanned is one of the ways ONR is working to support the Navy's 2021 Unmanned Task Force and integrate unmanned and autonomous technology at scale.

A strategic hedge
Selby emphasized the importance of America's current naval force structure needing a "strategic hedge." He noted that in World War II, the Navy was primarily invested in battleships as the nucleus of combat power for any future conflict. However, the Navy and the nation had a "hedge" investment in aircraft carrier and submarine force structure. Ultimately the hedge proved crucial to victory -- far different from the beginning of the war, when battleships were seen by many as the key.

The "small, the agile, and the many" represents a viable hedge to support the large and the complex platforms that comprise the backbone of today's force structure. Rapid development of unmanned, autonomous systems provides the technological drive to create a hedge option for the 21st century Navy and Marine Corps. Developing this strategic hedge at ONR is one of many ways the organization helps the Navy and Marine Corps adapt to potential futures.

Finally, Selby stressed the importance of moving from the current requirements-driven acquisition process -- a successful process for large platforms, but one not rooted in speed -- to a "problem-driven" process, where the Naval Research Enterprise asks operators and commanders what problems they are facing and rapidly creates solutions to solve their problems.

That approach has already begun. ONR provided dozens of unmanned platforms and sensors used in last April's Integrated Battle Problem 2021 (IBP-21), which focused on a PACFLEET battle problem. In 2022, those efforts will continue.