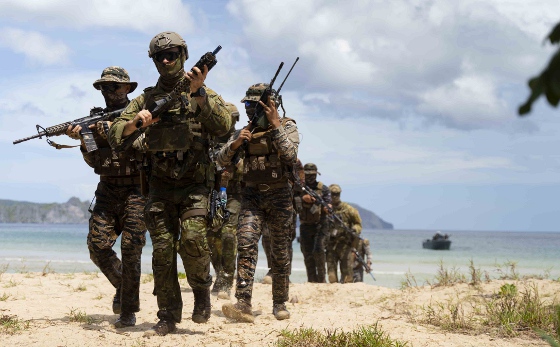 Navy SEALs along with Philippine and Australian special operations troops conduct an amphibious raid during Exercise Balikatan in the Philippines, April 1, 2022. Balikatan is an annual exercise between the Philippine and U.S. militaries designed to strengthen bilateral interoperability, capabilities, trust, and cooperation built over decades of shared experiences. [Photo by: Marine Corps Sgt. Mario Ramirez]

Leadership is paramount to the success of any army. Leaders not only make life-and-death decisions, but directly control the climate and quality of life of their subordinates.

But what is the real definition of leadership? Field Manual 6-22, Leader Development, defines leadership as "the process of influencing people by providing purpose, direction, and motivation to accomplish the mission and improve the organization."

In a pair of articles, we will discuss 12 fundamental leadership principles, as well as several educational and inspirational historical examples. Experienced leaders should already practice these principles; however, I have learned through personal experience never to assume anything.

7. BE AGGRESSIVE AND BOLD
"An army of deer led by a lion is more to be feared than an army of lions led by a deer." -- Phillip of Macedonia

A leader must be bold and aggressive. Many of history's most triumphant generals, such as Frederick the Great and Adm. Horatio Nelson, to name a few, embodied these qualities.

Frederick the Great built his army into the one of the most formidable in history. He was a bold general and used his infantry's swift maneuvering to confound and crush his enemies. This was the case at three of his most significant victories: the Battle of Hohenfriedberg in 1745 and the battles of Rossbach and Leuthen in 1757.

The Battle of Prague (1757), in which Frederick invaded Bohemia during the Third Silesian War (Seven Years' War) is a prime example of his audacity. With England as his only ally, he faced Austrian, French, Russian, Saxon, and Swedish forces, and though he came close to defeat many times, he finally won the war.

Considered one of the most historically audacious naval leaders, Nelson faced the "Armed Neutrality," made up of the Russian, Prussian, Danish, and Swedish fleets, at the Battle of Copenhagen in 1801.

The battle started badly for the British and the fleet commander, Adm. Sir Hyde Parker, ordered Nelson to withdraw. Nelson was informed of the signal by one of his officers and angrily responded, "I told you to look out on the Danish Commodore and let me know when he surrendered. Keep your eyes fixed on him." He then turned to his flag captain, and said, "You know, Foley, I have only one eye. I have a right to be blind sometimes." He raised the telescope to his blind eye and said, "I really do not see the signal."

In the end, the British fleet won, thus making the Battle of Copenhagen one of Nelson's greatest victories.

8. TAKE CARE OF YOUR SOLDIERS
"The badge of rank that an officer wears on his coat is really a symbol of servitude to his men." -- Maj. Gen. Maxwell D. Taylor

A competent leader preserves combat power by putting his Soldiers first and doing the most to improve their situation. You will gain Soldiers' trust by making sure they are well equipped, fed, and rested. Beyond meeting their basic needs, it is also essential to be an advocate and ensure they receive proper recognition for their achievements. The U.S. Army prioritizes this as "the mission, the men, and me."

One of Alexander the Great's leadership qualities was the ability to place his men first.

After covering more than 400 miles in 11 days, Alexander and his soldiers were nearly dead from thirst. Some Macedonians had brought back a few bags of water from a distant river, and they offered Alexander a helmetful. Although his mouth was so dry that he was nearly choking, he gave back the helmet with his thanks and explained that there was not enough for everyone, and if he drank, then the others would faint. When his men saw this, they spurred their horses forward and shouted for him to lead them. With such a king, they said, they would defy any hardships.

Paratroopers participate in a division run along Long Street during the All American Run on Fort Bragg, N.C., Nov 19, 2021. [U.S. Army photo by Spc. Vincent Levelev]

9. BE A STUDENT OF THE PAST
"The only right way of learning the science of war is to read and reread the campaigns of the great captains." -- Napoleon

History offers a wealth of information to those who have the foresight to examine it. In addition to obtaining vital technical and tactical knowledge, Soldiers can learn by studying how past leaders performed in the fog of war.

Gen. George Patton was a consummate warrior, known for studying history and acquiring an impressive library of professional military books during his lifetime. At an early age, he chose to become a Soldier. His father nurtured him in the classics, as well as the lore of the Patton family, which was composed of military leaders, including two uncles who were Confederate officers killed in battle.

Unfortunately, Patton had dyslexia, a learning disability not well known or diagnosed at the time. He realized, however, that with determination and constant effort, he could pursue military studies and achieve his goal of becoming a great leader.

He understood the military profession required immense technical competence, knowledge of weapons and equipment, tactics and operations, and maneuvers and logistics. Therefore, he expended vast amounts of time and energy in reading and making copious notes in the pages of his books, making him not only familiar with the field and technical manuals of his time, but also knowledgeable about history.

In war, lack of decisiveness can have fatal consequences. Once you make up your mind, stick to your decision. Never show yourself to be indecisive.

When Julius Caesar refused to lay down his military command and return to Rome at the end of the Gallic Wars, he said, "The die is cast," thus making it clear that his choice was irrevocable.

In 1805, during the Napoleonic Wars, Napoleon's empire was threatened by England, Russia, and Austria. During this period, Napoleon was able to compel the Austrian army to surrender without firing a shot through rapid marching and maneuvers.

As a final example, in 1862, at the Battle of Mobile Bay during the American Civil War, Confederate mines blocked Union Adm. David Farragut's path during an attempt to attack a Confederate Navy squadron to seize three forts guarding the bay entrance. In a decisive statement, Farragut said, "Damn the torpedoes, full speed ahead."

11. SHOW DETERMINATION
"You are never beaten until you admit it." -- Gen. George S. Patton Jr.

A leader must show determination even when others do not. This "never say die" attitude is necessary for your Soldiers to be tirelessly persistent during desperate, bleak, or challenging situations.

Brig. Gen. Anthony McAuliffe, acting commander of the 101st Airborne Division during the Battle of the Bulge in World War II, is an excellent example. In December 1944, at Bastogne, Belgium, the Germans sent a demand for his surrender. He responded by saying, "Nuts."

To articulate the resolve and determination of his countrymen, Winston Churchill, the British Prime Minister, gave a number of inspiring speeches during World War II:

-- Blood, Toil, Tears and Sweat
"I would say to the House, as I said to those who have joined this government: I have nothing to offer but blood, toil, tears and sweat. We have before us an ordeal of the most grievous kind. We have before us many, many long months of struggle and of suffering.

You ask, what is our aim? I can answer in one word: Victory. Victory at all costs -- victory in spite of all terror -- victory, however long and hard the road may be, for without victory, there is no survival."

-- Their Finest Hour
"Let us, therefore, brace ourselves to our duties, and so bear ourselves, that if the British Empire and its Commonwealth last for a thousand years, men will still say, 'This was their finest hour.'" 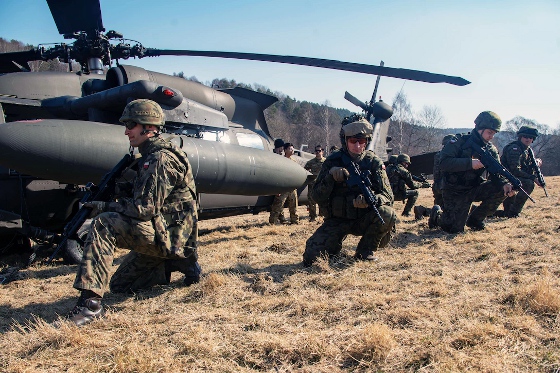 12. BE STRONG OF CHARACTER
"Duty, Honor, Country. Those three hallowed words reverently dictate what you ought to be, what you can be, what you will be." -- Gen. Douglas MacArthur

Gen. of the Army Douglas MacArthur was a historical leader who embodied the definition of strong character. He was a renowned general who won many battles against numerically superior and better-equipped foes and was awarded the Medal of Honor for defending the Philippines during World War II.

MacArthur did not accept anything but the best, even during times of peace, which was evident when he trained the 1927 American Olympic team. With his commanding presence, he pulled together a strong team, retorting, "Americans never quit," in response to the U.S. boxing team manager who wanted to withdraw from the competition due to an unfair decision.

In his acceptance speech for the Sylvanus Thayer Award, one of the most eloquent expressions of leadership principles ever delivered, MacArthur's words speak to today's Soldiers, especially NCOs who are "warrior-leaders of strong character":

"Duty, Honor, Country. Those three hallowed words reverently dictate what you ought to be, what you can be, what you will be ... They build your basic character. They mold you for your future roles as the custodians of the Nation's defense. They make you strong enough to know when you are weak, and brave enough to face yourself when you are afraid."

Training and caring for your Soldiers ultimately leads to unit success. Conflicts and setbacks allow leaders to develop abilities and characteristics that play a vital part in their future leadership. Past generals such as George Patton, who had dyslexia, and Douglas MacArthur, whose application to West Point was rejected twice, remind today's military leaders that experiencing challenges is part of leadership and does not hinder the ability to lead. As Gen. Dennis J. Reimer, Army Chief of Staff from 1995 to 1999, said, "The role of leadership is to turn challenges into opportunities."

It is a tremendous honor, as an NCO, to lead Soldiers, and along with this honor comes the responsibility to do it well. An ideal Army NCO has a sharp intellect, physical presence, professional competence, high moral character, and serves as a role model. He or she is willing to act decisively, within the intent and purpose of those appointed over them and in the best interest of the organization. They recognize organizations built on mutual trust and confidence accomplish peacetime and wartime missions.

An NCO who is proficient in some of these 12 principles, but deficient in others, will have a detrimental effect on mission success, morale, and the efficacy of leadership. It is therefore imperative that all leaders build competency in all principles and become well rounded.

The men and women of the U.S. military have made countless sacrifices in the service of our great nation. They deserve the best leadership that we can offer, and it is our sacred duty to give it to them.