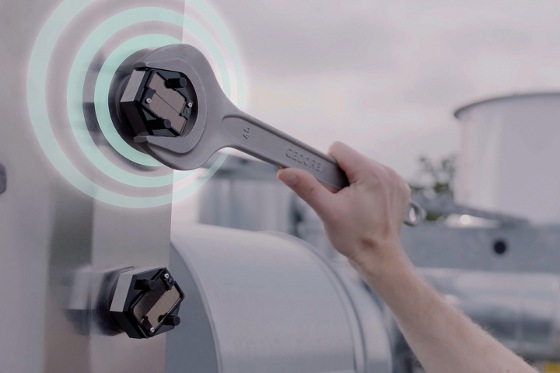 The Smart Screw Connection is a fully integrated, self-powered IoT device for determining the preload force. Data from its sensors can be transmitted wirelessly, even over long distances. [Credit: Â© Fraunhofer]

Screw connections on critical infrastructures, such as cranes, scaffolding, high-rise buildings, bridges, wind turbines, and machines of all sizes as well as in production facilities, are exposed to major stresses and must be checked on a regular basis.

A team of researchers from the Fraunhofer Cluster of Excellence Cognitive Internet Technologies CCIT has developed a solution called "Smart Screw Connection" that combines self-powered sensors and radio technology to provide a reliable means of remotely monitoring the screw connections.

The Smart Screw Connection comes with a screw fitted with a washer that is equipped with a piezoresistive DiaForce® thin film. When the screw is tightened, the pressure-sensitive sensors register the preload force at three points. Any change in the preload force changes the electrical resistance in the DiaForce thin film.

"When a screw comes loose, the resulting change in resistance is reported to a radio module located on the screw head. The radio module, in turn, sends the data to a base station, which collects the information from all relevant screws in the object," says Dr. Peter Spies, project manager and group manager Integrated Energy Supplies at the Fraunhofer Institute for Integrated Circuits IIS in Germany.

The DiaForce thin film was developed by the Fraunhofer Institute for Surface Engineering and Thin Films IST. In terms of radio technology, Fraunhofer IIS has contributed the mioty® low-power wide-area network (LPWAN) protocol. This technology is capable of sending small packets of data over long distances, consuming minimal energy, from more than 100,000 sensors via just one base station.

The base station could be located at the edge of a wind farm, for example, several hundred meters or even a few kilometers away. A software program then displays the data for each individual screw in a graphical overview. Depending on the configuration and application, the status of the screw connections is transmitted, based on an event or at specified intervals. 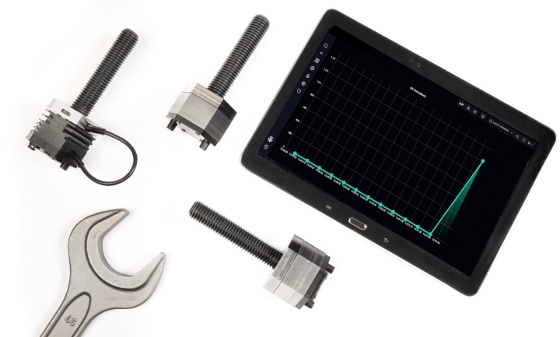 The Smart Screw Connection is designed as a flexible, retrofittable system for DIN screws of various sizes. The display shows the status of the relevant screw in graphical form. [Credit: Â© Fraunhofer]

"This remote monitoring system allows us, for the first time, to keep an eye on the stability of safety-critical infrastructures at all times, even remotely, and to carry out a proper check on every single relevant screw. This is a major asset in terms of safety. When inspecting a bridge or wind turbine, no engineer is required to be on site to check each screw individually, as all the data are transmitted via radio to the service station," says Spies.

The Smart Screw Connection can be adapted for a wide variety of applications. No matter whether it's for flange connections in industry, for the bolts in steel girders in high-rise buildings, for the load-bearing parts of bridges, or for attaching rotors to wind turbines, the system can be individually configured for each scenario and adapted to the relevant load profile.

The researchers have also resolved the problem of energy demand in a resource-efficient manner. The system operates using energy harvesting -- using heat or light to generate electricity. In one scenario, for example, a thermoelectric generator generates electricity from the minute differences in temperature between the screw head and the environment. It is also possible to generate the electricity through solar cells. Energy harvesting makes the system self-powered.

Security was also of importance to the Fraunhofer researchers. During installation, each individual screw, along with the sensor unit and radio module, is placed in a shielded programming box. The box provides the screw with an individual ID via short-range RFID, as well as its requirement profile and an individual encryption key. The radio link from the screws to the base station is also encrypted during data transmission.

"This is how we prevent criminals or hackers from sabotaging the system," says Spies. "The technical staff who monitor a wind turbine, for example, can really rely on the data."

The technology is designed for commercially available DIN screws. The system is ready to use for M18 screws, and versions will soon be available for M20 and M36 screws. A demonstration version was first exhibited at the Hannover Messe 2022 show at the end of May.