A father and son-in-law, both scientists with knowledge and experience in astronomy, engaged in a dynamic conversation about sundial technology while on a family car trip in August 2021. 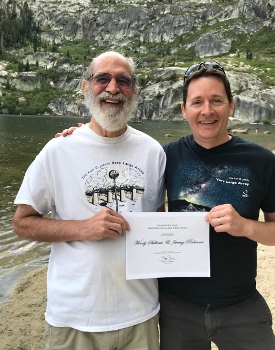 Jeremy T. Robinson, a materials research scientist at the U.S. Naval Research Laboratory (NRL), and Woodruff T. Sullivan III, who served as a summer student at NRL in the 1960s, discussed the idea of crafting a nano-sundial.

After testing half a dozen prototypes, their invention was awarded a provisional patent nine months later for "MicroDial: Miniaturized apparatus for solar time keeping" and went on to win an international contest for the "world's smallest sundial" that was hosted by the French magazine Cadrans Solaires Pour Tous (translation: Sundials for All).

"We never imagined our casual conversation would turn into a patentable device," said Robinson.

The working area of the sundial is over 1,000 times smaller than the existing world record and is approximately the width of a human hair (~100 microns). Beyond the novelty of going small, the apparatus has the potential to provide situational awareness in GPS-denied environments, especially where celestial timing and navigation can be beneficial. 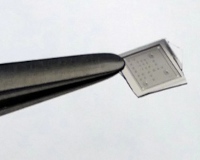 Tweezers hold the MicroDial on which 30 dial patterns were printed for testing purposes. [Credit: Photo by Jeremy Robinson]

"While conventional sundials are read with the human eye, data from this dial are captured digitally. This allows the use of image recognition software to extract time and latitude information, and placement on systems that are sensitive to size, weight, and power," Robinson said.

The first breakthrough in the project came with the realization that rather than work with a shadow as in a conventional sundial, an improved design would allow sunlight to fall on a surface with the sundial pattern after passing through a very small aperture. Furthermore, standard glass cover slips for microscopes can be very thin (0.1 mm), and techniques exist to print lithographically with very fine features on glass. An aperture-type dial would provide a successful configuration with an aperture on the top surface and a dial pattern on the bottom surface.

Robinson and Sullivan's second break was recognizing that they could view the transmitted light spot through the aperture dial using a standard digital camera, or more specifically the image sensor of a camera without its lenses. Since the typical size of a camera's pixels is 1 to 3 microns and the focal plane of the sensor is at its surface, the duo found that printing one side of the glass slide with a few-micron diameter aperture carefully aligned to the dial pattern on the other side could work as a tiny sundial. The projected light spot would appear in focus with the dial pattern and is easily read using the standard output of the camera. The duo found that this first prototype with the sun was very promising.

Image captured at solar noon on 10 May 2022, compared to the shadow from a human hair (of width 110 micrometers) taken at the same time for scale. The motto of the dial is labeled: "So little time ..." [Credit: Photo by Jeremy Robinson]

"NRL was a marvelous place for my training as student," said Sullivan. "The research I participated in on molecules in the interstellar medium led me to a postdoc in the Netherlands and a faculty position at the University of Washington, where I have remained for almost half a century."

The innovative efforts of NRL civilians like Robinson and Sullivan continue to foster the ongoing advancements in research that are necessary for Department of Defense (DoD) to meet present and future challenges.