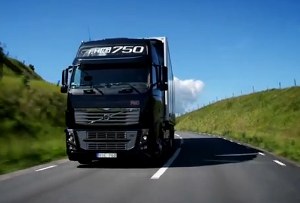 The truck industry is always searching for solutions that cut fuel consumption. One method is to use the vehicle's kinetic energy to propel the truck. Now Volvo Trucks has developed I-See, which operates like an autopilot and takes over gear changing and utilizes gradients to save fuel.

"If kinetic energy can be exploited to a greater extent, it may help cut fuel consumption. This will benefit both the environment and the industry's economy, something that is very important today as fuel costs are becoming an increasingly heavy burden on many haulage firms," says Anders Eriksson, product developer at Volvo Trucks.

And it is precisely this that Volvo Trucks has succeeded in developing with its new I-See solution. The system harnesses the truck's own kinetic energy to "push" the vehicle up hills. On downhill gradients the same energy is used for acceleration.

Kinetic energy can save 5%
I-See is linked to the transmission's tilt sensor and obtains information about the topography digitally. The fact that the system is not dependent on maps makes it more dependable, since it always obtains the very latest information. I-See can recall about 4,000 gradients, corresponding to a distance of 5,000 km. 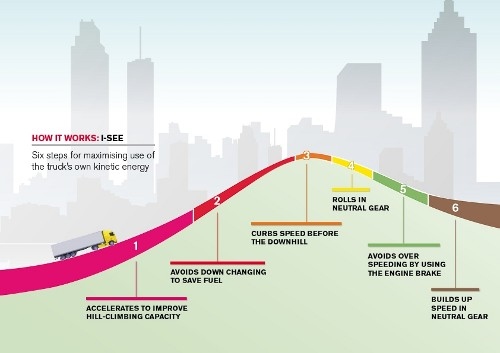 "I-See is an autopilot linked to the truck's cruise control, taking over and handling gear changes, throttle, and brakes on gradients, ensuring they all operate in the most fuel-efficient way possible. I-See freewheels as much as possible - so on certain stretches of road no fuel is used at all," explains Hayder Wokil, product manager at Volvo Trucks.

"In this way, fuel consumption can be cut by up to 5%," says Wokil. "This figure is based on the results of simulations and tests on public roads. I-See requires use of the cruise control, and we know that on average drivers use cruise control about half the time. For a truck in normal operation, covering 140,000 kilometres a year, the saving will be about 1,000 liters of fuel annually. This makes a big difference to the haulage firm's profitability."

Biggest effect on small hills
I-See carries out six different operations to use the kinetic energy to the very maximum. For instance, I-See accelerates up hills, remains in a high gear for as long as possible, and freewheels on descents to exploit the truck's weight as a propulsion motor.

"I-See works best in undulating terrain. With moderately long and steep slopes, I-See ensures that you can freewheel for long distances without using the engine," explains Eriksson, who was responsible for the development of I-See. "It is this freewheeling capability that makes the system special," he adds. When the truck rolls freely, virtually no fuel is used. But in order to freewheel, a whole lot of data is required.

"It imposes high demands on precision. For instance, you have to know whether your speed will drop or increase over the next stretch of road. A gradient of just a few percent can be the decisive factor," says Eriksson.

Other factors that make a difference are air resistance and the truck's weight. All told, the system has to keep track of and process a lot of information. Many truck drivers who test I-See will recognize the driving style it adopts.

"I-See imitates the driving style of good drivers. They utilize the vehicle's kinetic energy, accelerate in time, and avoid unnecessary gear changing," says Wokil. "But unlike a driver, I-See never gets tired - it's like an autopilot."

This allows the driver to focus more on the surrounding traffic and other aspects of the journey. What is more, progress on the road is more relaxed.

"And an alert driver is a better driver. That's something we know for sure," says Wokil.

Eriksson also points out that it is not only fuel that is saved. "I-See reduces brake and tire wear, for instance," he says. "And that naturally benefits the environment."

I-See has functions for six different scenarios on a gradient:

I-See will become available on the market in 2013.