An engine innovation first conceived and tested by Sandia National Laboratories has attracted the attention of big business because of its potential to reduce emissions of soot and nitrogen oxides cost effectively, encourage the use of renewable fuels, and maintain or improve engine performance.

Ducted fuel injection, developed by Charles Mueller at Sandia's Combustion Research Facility, is able to fine-tune the fuel-air mixture in an engine to the point of eliminating between 50 to 100 percent of the soot depending on the engine's instantaneous speed and power level.

Mueller said engine manufacturers are "starting to show excitement" about ducted fuel injection. Not only does it work well with conventional diesel fuel, it is conceptually simple and can be constructed from low-cost materials. 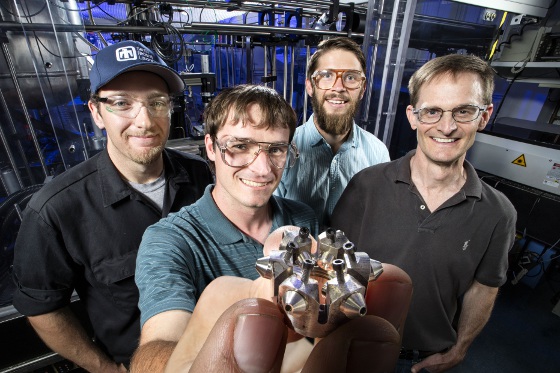 "Ducted fuel injection is also conceivably retrofittable onto existing engines," Mueller said. "This is especially important for large engines, like those in ships or locomotives, where the engines can cost a million dollars or more, and full electrification is cost prohibitive. A retrofit could be relatively inexpensive and could provide substantial emissions benefits right away."

"If you unscrew the tube on a Bunsen burner and you light the gas jet, you get a tall, sooty orange flame," Mueller said. "Turn off the gas, screw the tube back on and re-light the burner. Now you get a nice, short blue flame right at the end of the tube. The flame is blue because there isn't any soot."

Mueller thought that concept might be adaptable to combustion engines, so he and his team -- intern Christopher Nilsen, post-doctoral appointee Drummond Biles, and technologist Nathan Harry -- began experiments that have now resulted in an assembly of four to six small tubes -- or ducts -- directing fuel mixture from the injector to the points of ignition.

Mueller says that injectors in a traditional diesel engine create local igniting mixtures that contain two to 10 times more fuel than is needed for complete combustion.

"When you have that much excess fuel at high temperature, you tend to produce a lot of soot," he said. "Installing the ducts enables us to achieve diesel combustion that forms little to no soot, because the local igniting mixtures contain less excess fuel."

Limiting the formation of a universal engine pollutant
Generations of engine designs have failed to take soot out of emissions because there was a physical limit to the chemistry of fuel combustion.

"Soot is second only to carbon dioxide as a chemical that forces climate change, and it's toxic, so its emissions should be minimized," Mueller explained. "In the past, there's always been this problem called the soot-NOx tradeoff. That is: When you do something to lower soot, emissions of nitrogen oxides -- or NOx -- go up, and vice versa."

Nitrogen oxides are also atmospheric pollutants, and the tradeoff meant that truck, car, and equipment makers couldn't meet current legislated limits without adding exhaust-gas aftertreatment systems. These systems are analogous to catalytic converters on spark-ignition engines, though significantly larger and more expensive. But remove one of those pollutants almost entirely -- like ducted fuel injection does with soot -- and Mueller said you have changed the game.

"Now that we've got soot out of the way, there's no more soot-NOx tradeoff," he said. "So, we can add dilution -- taking some of the engine exhaust and routing it back to the intake -- to get rid of NOx without soot emissions becoming a problem. It's like a two-for-one deal on reducing pollutants."

Mueller said that in engine experiments, his team has observed simultaneous, orders-of-magnitude reductions in soot and nitrogen oxides.

"This gives us a path to much lower emissions for diesel engines, solving a long-standing problem for this highly efficient technology," he said.

Reducing trucking costs with ducted fuel injection, renewable fuels
The near elimination of soot and nitrogen oxides may also open up the market for renewable fuels. 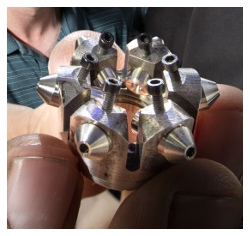 "Ducted fuel injection works great with conventional diesel fuel, but it works even better with oxygenated fuels, which have one or more oxygen atoms bonded into some or all of their molecules. Many renewable, sustainable fuels are oxygenated," Mueller said.

"Using oxygenated fuels with ducted fuel injection lowers emissions, perhaps enough to enable a less expensive engine system because less exhaust aftertreatment would be required," he said. "On a modern on-highway truck, aftertreatment amounts to about $12,000 in initial and operating costs over the life of the vehicle. Reducing even a fraction of those costs is a big deal, given the large number of these vehicles and their importance to the economy."

"Breaking the tradeoff between soot and nitrogen oxides is a research area of highest priority for diesel engine development," Miles said. "This is an example of the key role of government-supported research to identify and demonstrate the potential of innovative, high-risk technologies to reshape the landscape for an industry, our transportation infrastructure and our society, and then to work alongside commercial partners to get the technology into the marketplace."

Ford and a manufacturer of off-road equipment recently signed a cooperative research and development agreement with Sandia to help advance the technology.

Mueller is excited about collaborating with industry partners to move this breakthrough from the laboratory toward production engines.

"Ducted fuel injection shows promise for giving us clearly superior engines for the future," he said. "It should preserve all of the desirable attributes of a conventional diesel engine but also significantly lower the emissions, which lowers the cost of the engine system because you don't have to use as much aftertreatment. And, it works even better with current and emerging renewable fuels."

This research was conducted as part of the Co-Optimization of Fuels and Engines program sponsored by the U.S. Department of Energy, Office of Energy Efficiency and Renewable Energy, through the Vehicle Technologies and Bioenergy Technologies offices.