Metal foam stops .50-caliber rounds -- as good as solid steel at half the weight 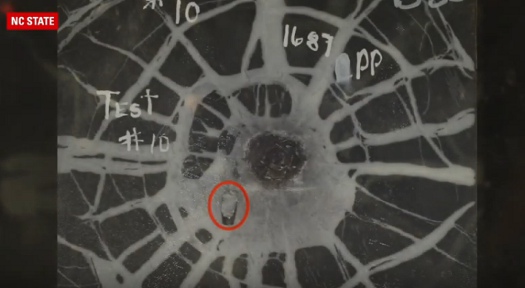 In testing, a .50-cliber armor-piercing round traveling at 514 m/sec bounces off composite metal foam armor, leaving no visible back-plate indentation.

Researchers from NC State have recently demonstrated that vehicle armor using composite metal foam (CMF) can stop ball and armor-piercing .50-caliber rounds as well as conventional steel armor, even though it weighs less than half as much. The finding means that vehicle designers will be able to develop lighter military vehicles without sacrificing safety, or can improve protection without making vehicles heavier.

CMF is a foam that consists of hollow, metallic spheres -- made of materials such as stainless steel or titanium -- embedded in a metallic matrix made of steel, titanium, aluminum, or other metallic alloys. In this study, the researchers used steel-steel CMF, meaning that both the spheres and the matrix were made of steel.

For the study, researchers manufactured a hard armor system consisting of a ceramic faceplate, a CMF core, and a thin back plate made of aluminum. The armor was tested using .50 caliber ball and armor-piercing rounds. The armor was tested with the rounds being fired at impact velocities from 500 m/sec up to 885 m/sec.

"The CMF armor was less than half the weight of the rolled homogeneous steel armor needed to achieve the same level of protection," says Afsaneh Rabiei, corresponding author of a paper on the work and a professor of mechanical and aerospace engineering at North Carolina State University. Rabiei, the inventor of CMF, has spent years developing and testing CMF materials.

"In other words, we were able to achieve significant weight savings -- which benefits vehicle performance and fuel efficiency -- without sacrificing protection," Rabiei says.

"This work shows that CMF can offer a significant advantage for vehicle armor, but there is still room for improvement," Rabiei says. "These findings stem from testing armors we made by simply combining steel-steel CMF with off-the-shelf ceramic face plates, aluminum back plate, and adhesive material. We only optimized our CMF material and replaced the steel plate in standard vehicle armor with steel-steel CMF armor. There is additional work we could do to make it even better. For example, we would like to optimize the adhesion and thickness of the ceramic, CMF, and aluminum layers, which may lead to even lower total weight and improved efficiency of the final armor." 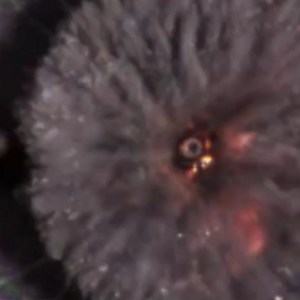 In previous work (see Designfax article here), Rabiei and her collaborators demonstrated that CMF could block blast pressure and fragmentation at 5,000 ft/sec from high-explosive incendiary rounds detonating only 18 in. away. Her team also showed that CMF could stop a 7.62- x 63-mm M2 armor-piercing projectile at a total thickness of less than an inch, while the indentation on the back was less than 8 mm. For context, the National Institute of Justice standard allows up to 44-mm indentation in the back of armor.

In addition, Rabiei's group has shown that CMFs, in addition to being lightweight, are very effective at shielding X-rays, gamma rays, and neutron radiation -- and can handle fire and heat twice as well as the plain metals they are made of.

"In short, CMFs hold promise for a variety of applications: from space exploration to shipping nuclear waste, explosives and hazardous materials, to military and security applications and even cars, buses, and trains," Rabiei says.

The new paper, "Ballistic Performance of Composite Metal Foam against Large Caliber Threats," is published in the journal Composite Structures. First author of the paper is Jacob Marx, a Ph.D. student at NC State. The paper was co-authored by Marc Portanova of the Aviation Development Directorate in the U.S. Army Combat Capabilities Development Command.