Beats like the real thing: Bionic heart is hybrid creation

As the geriatric population is expected to balloon in the coming decade, so too will rates of heart disease in the United States. The demand for prosthetic heart valves and other cardiac devices -- a market that is valued at more than $5 billion dollars today -- is predicted to rise by almost 13 percent in the next six years.

Prosthetic valves are designed to mimic a real, healthy heart valve in helping to circulate blood through the body. However, many of them have issues such as leakage around the valve, and engineers working to improve these designs must test them repeatedly, first in simple benchtop simulators, then in animal subjects, before reaching human trials -- an arduous and expensive process.

Now, engineers at MIT and their partners have developed a bionic heart that offers a more realistic model for testing out artificial valves and other cardiac devices.

The device is a real biological heart with its tough muscle tissue replaced with a soft robotic matrix of artificial heart muscles, resembling bubble wrap. The orientation of the artificial muscles mimics the pattern of the heart's natural muscle fibers in such a way that when the researchers remotely inflate the bubbles, they act together to squeeze and twist the inner heart, similar to the way a real, whole heart beats and pumps blood. 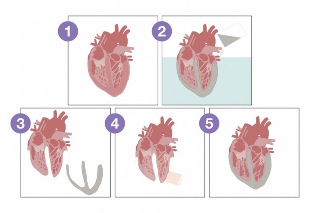 With this new design, which they call a "biorobotic hybrid heart," the researchers envision that device designers and engineers could iterate and fine-tune designs more quickly by testing on the biohybrid heart, significantly reducing the cost of cardiac device development.

"Regulatory testing of cardiac devices requires many fatigue tests and animal tests," says Ellen Roche, assistant professor of mechanical engineering at MIT. "[The new device] could realistically represent what happens in a real heart to reduce the amount of animal testing or iterate the design more quickly."

Mechanics of the heart
Before coming to MIT, Roche worked briefly in the biomedical industry, helping to test cardiac devices on artificial heart models in the lab.

"At the time, I didn't feel any of these benchtop setups were representative of both the anatomy and the physiological biomechanics of the heart," Roche recalls. "There was an unmet need in terms of device testing."

In separate research as part of her doctoral work at Harvard University, she developed a soft, robotic, implantable sleeve designed to wrap around a whole, live heart, to help it pump blood in patients suffering from heart failure.

At MIT, she and Park wondered if they could combine the two research avenues to develop a hybrid heart: a heart that is made partly of chemically preserved, explanted heart tissue and partly of soft artificial actuators that help the heart pump blood. Such a model, they proposed, should be a more realistic and durable environment in which to test cardiac devices, compared with models that are either entirely artificial but do not capture the heart's complex anatomy, or are made from a real explanted heart, requiring highly controlled conditions to keep the tissue alive.

The team briefly considered wrapping a whole, explanted heart in a soft robotic sleeve, similar to Roche's previous work, but realized the heart's outer muscle tissue, the myocardium, quickly stiffened when removed from the body. Any robotic contraction by the sleeve would fail to translate sufficiently to the heart within.

Instead, the team looked for ways to design a soft robotic matrix to replace the heart's natural muscle tissue in both material and function. They decided to try out their idea first on the heart's left ventricle, one of four chambers in the heart, which pumps blood to the rest of the body, while the right ventricle uses less force to pump blood to the lungs. 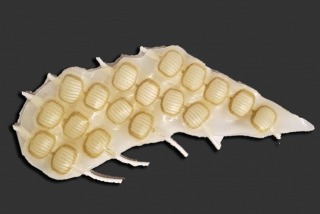 A close-up of a synthetic matrix of soft robotic actuators that can be wrapped around a heart ventricle and inflated to squeeze and twist the heart in the same way a real heart pumps blood. [Image courtesy of the researchers]

"The left ventricle is the harder one to recreate given its higher operating pressures, and we like to start with the hard challenges," Roche says.

The heart, unfurled
The heart normally pumps blood by squeezing and twisting, a complex combination of motions that is a result of the alignment of muscle fibers along the outer myocardium that covers each of the heart's ventricles. The team planned to fabricate a matrix of artificial muscles resembling inflatable bubbles, aligned in the orientations of the natural cardiac muscle. But copying these patterns by studying a ventricle's three-dimensional geometry proved extremely challenging.

They eventually came across the helical ventricular myocardial band theory, the idea that cardiac muscle is essentially a large helical band that wraps around each of the heart's ventricles. This theory is still a subject of debate by some researchers, but Roche and her colleagues took it as inspiration for their design. Instead of trying to copy the left ventricle's muscle fiber orientation from a 3D perspective, the team decided to remove the ventricle's outer muscle tissue and unwrap it to form a long, flat band -- a geometry that should be far easier to recreate. In this case, they used the cardiac tissue from an explanted pig heart.

In collaboration with co-lead author Chris Nguyen at MGH, the researchers used diffusion tensor imaging, an advanced technique that typically tracks how water flows through white matter in the brain, to map the microscopic fiber orientations of a left ventricle's unfurled, two-dimensional muscle band. They then fabricated a matrix of artificial muscle fibers made from thin air tubes, each connected to a series of inflatable pockets, or bubbles, the orientation of which they patterned after the imaged muscle fibers.

The soft matrix consists of two layers of silicone, with a water-soluble layer between them to prevent the layers from sticking, as well as two layers of laser-cut paper, which ensures that the bubbles inflate in a specific orientation.

The motion of the biohybrid heart mimics the pumping motion of a real heart under echocardiography. [Credit: Mossab Saeed]

The researchers also developed a new type of bioadhesive to glue the bubble wrap to the ventricle's real, intracardiac tissue. While adhesives exist for bonding biological tissues to each other, and for materials like silicone to each other, the team realized few soft adhesives do an adequate job of gluing together biological tissue with synthetic materials, silicone in particular.

So Roche collaborated with Zhao, associate professor of mechanical engineering at MIT, who specializes in developing hydrogel-based adhesives. The new adhesive, named TissueSil, was made by functionalizing silicone in a chemical cross-linking process to bond with components in heart tissue. The result was a viscous liquid that the researchers brushed onto the soft robotic matrix. They also brushed the glue onto a new explanted pig heart that had its left ventricle removed but its endocardial structures preserved. When they wrapped the artificial muscle matrix around this tissue, the two bonded tightly.

Finally, the researchers placed the entire hybrid heart in a mold that they had previously cast of the original, whole heart and filled the mold with silicone to encase the hybrid heart in a uniform covering -- a step that produced a form similar to a real heart and ensured that the robotic bubble wrap fit snugly around the real ventricle.

"That way, you don't lose transmission of motion from the synthetic muscle to the biological tissue," Roche says.

When the researchers pumped air into the bubble wrap at frequencies resembling a naturally beating heart and imaged the bionic heart's response, it contracted in a manner similar to the way a real heart moves to pump blood through the body.

Ultimately, the researchers hope to use the bionic heart as a realistic environment to help designers test cardiac devices such as prosthetic heart valves.

"Imagine that a patient before cardiac device implantation could have their heart scanned, and then clinicians could tune the device to perform optimally in the patient well before the surgery," says Nyugen. "Also, with further tissue engineering, we could potentially see the biorobotic hybrid heart be used as an artificial heart -- a very needed potential solution given the global heart failure epidemic where millions of people are at the mercy of a competitive heart transplant list."

This research was supported in part by the National Science Foundation.