50 Years Ago: NASA's Moon rock sample is star of World's Fair in Japan 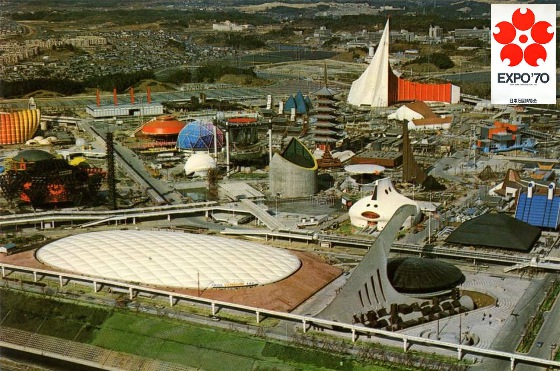 Beginning on Mar. 15, 1970, Osaka, Japan, played host to Expo '70, the first World's Fair held in Asia. The event marked the traditionally accepted 2,600th anniversary of the founding of Japan (delayed from the actual event in 1940 by World War II), the centennial of Japan's entry into the worldwide economic sphere, and the unprecedented rise of Japan as an economic power in the post-war world.

Fittingly, organizers chose "Progress and Harmony for Mankind" as the theme for the Expo. A total of 76 nations and the British crown colony of Hong Kong participated, along with several Japanese corporations.

Until its closing on Sept. 13, 1970, 64 million visitors, 97 percent of them Japanese citizens, attended the Expo, the most of any world's fair to that time. Several new technologies, such as the first IMAX large format movie, early mobile phones, local area networking, and magnetic levitation (maglev), debuted at the Osaka Expo. Estimates placed the cost of building the Expo at $500 million, a considerable sum in 1970. 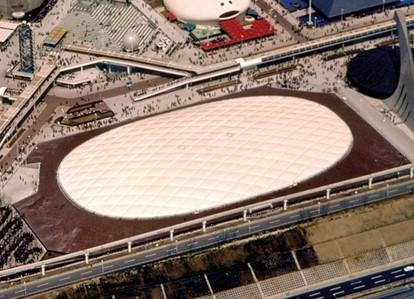 Aerial view of the U.S. pavilion. 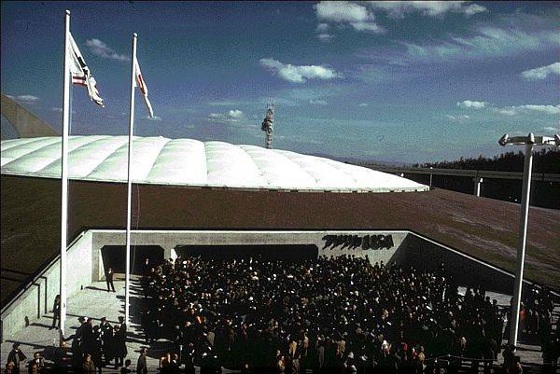 Street-level view of the entrance to the U.S. pavilion.

The United States Information Agency had responsibility for planning the U.S. pavilion, designed to demonstrate the diversity and creativity of the American spirit. Seven exhibits on photography, American painting, sports, space exploration, architecture, folk arts, and contemporary art illustrated the common theme of "Images of America."

The 100,000-sq-ft pavilion, designed by Davis, Brody and Associates in collaboration with the graphics team of Chermayeff & Geismar, had an understated appearance from the outside but appeared open and airy on the inside. The designers created the interior of the pavilion by excavating a large, oval-shaped shallow hole and building up the sides with the excavated soil. The roof consisted of the largest clear-span air-supported cable roof built to date, made of translucent vinyl-coated fiberglass weighing about 1 lb/ft2. Four large blowers kept the roof inflated by an internal positive air pressure 0.03 lb/in2. above outside atmospheric pressure. The pavilion, estimated to have cost $2.6 million, accommodated up to 10,000 visitors an hour during peak times.

Left: Re-creation of the Apollo 11 landing site in the Sea of Tranquility with two space-suited figures. Right: Apollo 12 astronauts (left to right) Bean, Conrad, and Gordon standing on the LM during their visit to Expo '70.

Left: Crowds gather near the lunar landing exhibit, with a Lunar Orbiter spacecraft hanging from the ceiling above. Middle: Visitors inspect the Apollo 8 Command Module. Right: The Gemini 12 capsule and space-suited figures suspended from the ceiling in the space exhibit.

Charles A. Biggs, chief of the Exhibits Division at the Manned Spacecraft Center (MSC), now the Johnson Space Center in Houston, coordinated the space artifacts on display in the U.S. pavilion, the largest of its seven exhibits. A full-scale replica of the Apollo 11 landing site complete with a Lunar Module (LM), an American flag, and two space-suited figures greeted visitors as they entered the space exploration hall. 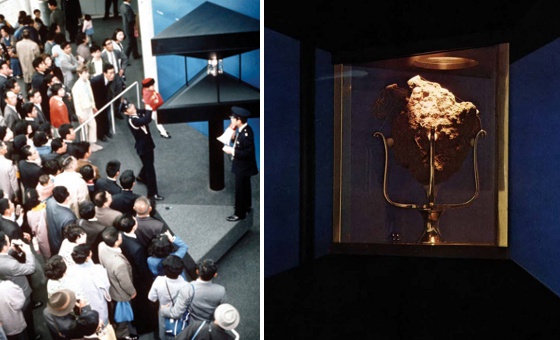 Three flown crewed spacecraft, Apollo 8, Gemini 12, and Freedom 7, hung by cables from the ceiling along with space-suited mannequins. Other displays included a Lunar Orbiter spacecraft, a flown camera, a Saturn V F-1 engine, replicas of other spacecraft, samples of space food, and assorted memorabilia donated by astronauts including Walter M. "Wally" Schirra's harmonica from his Gemini 6 mission.

The star attraction of the U.S. pavilion, possibly even the entire fair, undoubtedly was a rather unremarkable looking 2-lb rock. Its provenance gave this particular rock star appeal: On Nov. 20, 1969, Apollo 12 astronaut Alan L. Bean found the rock on the rim of Head Crater in the Moon's Ocean of Storms. The 3.2 billion-year-old basaltic rock, catalog number 12055, was originally buried deep beneath the Moon's surface until a meteorite impact 15 million years ago excavated it, bringing it to the surface.

Bean and fellow Moon walker Charles "Pete" Conrad photographed and collected it, and along with their third crewmate Richard F. Gordon they returned the chunk of basalt to Earth, a small part of the 75 lb of lunar material they brought back. 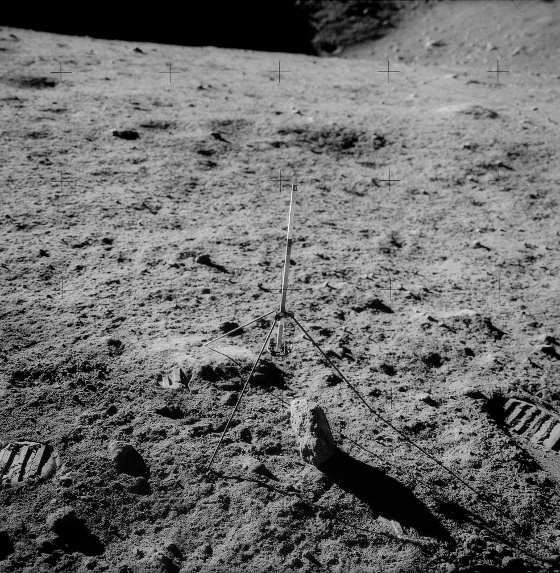 Moon rock 12055 as it appeared on the lunar surface prior to collection. 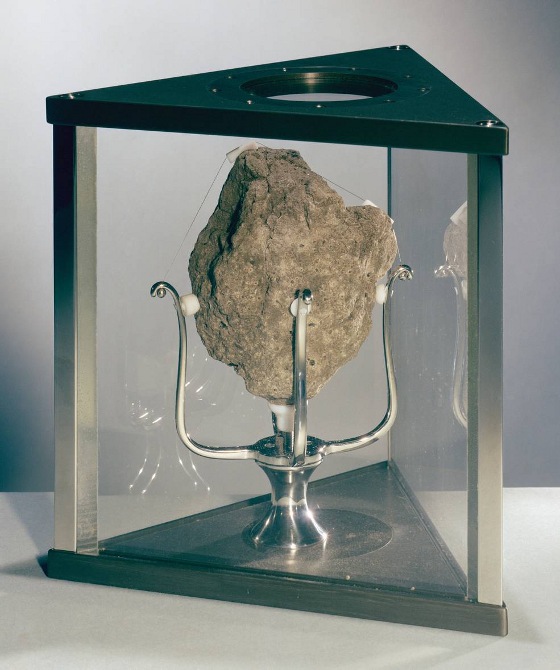 Moon rock 12055 in its display case prior to shipping to Osaka.

Lines to view the Moon rock could be as long as two hours; by some accounts, many fair goers attended just to see it. On opening day, 8,000 visitors per hour poured into the pavilion, overwhelming Japanese security. The Moon rock welcomed an average of 80,000 visitors per day, and a total of 14 million people saw it. Among those visitors, Apollo 12 astronauts Conrad, Gordon, and Bean toured the American pavilion on Mar. 25 during the last stop of their around the world "Bullseye" Presidential goodwill tour. (Today, Moon rock 12055 is on display at the Cleveland Museum of Natural History, with smaller pieces in museums in the Philippines and Bonn, Germany.)

As low key as the U.S. pavilion appeared from the outside, by contrast the Soviet pavilion dazzled with its height, at 330 ft the tallest at Expo '70, and its colors, brilliant red and white. Designed to showcase the 100th anniversary of the birth of Vladimir I. Lenin, the pavilion displayed not only Soviet technology such as an enormous screen that played 10 films at once but also Russian culture including a piano that once belonged to composer Pyotr I. Tchaikovsky. Soviet space hardware like replicas of the Vostok capsule flown by the first man in space, Yuri A. Gagarin, and the docked Soyuz 4 and 5 spacecraft, naturally featured prominently in the large, airy interior.

The Lunar Module (LM) on display at Expo '70 included components from two ground-based articles to provide the most realistic representation of a flight vehicle. Engineers from the LM's manufacturer, the Grumman Aerospace Corporation in Bethpage, NY, joined the descent stage from the Lunar Module Test Article-8 (LTA-8), used in vacuum chamber testing at MSC in 1968, together with the ascent stage of LM-2, an unflown but flight-like vehicle.

Upon return to the U.S. the LTA-8's ascent and descent stages were reunited and can be see today at Space Center Houston. Likewise, the LM-2's ascent stage was reunited with its lower half, and the entire vehicle, reconfigured to resemble the Apollo 11 LM Eagle, is on display at the Smithsonian Institution's National Air and Space Museum in Washington, DC.